The Root recently published the article, “Did My White Ancestor Become Black?”, written by Henry Louis Gates Jr. and Eileen Pironti.  We all know who Henry is from his PBS Series, Finding Your Roots.

America is the great mixing bowl of the world, with Native American, European and African people living in very close proximity for the past 400 years.  Needless to say, on the subject of admixture and race, things are not always what they seem.

Henry Gates sums it up quite well in his article, regardless of what your ancestor looked like, or your family looks like today, “the only way to ascertain the ethnic mixture of your own ancestry is to take an admixture test from Family Tree DNA, 23andMe or Ancestry.com.”

Interestingly enough, in an earlier issue of The Root, Henry talks about how black are Black Americans.

In that article, Henry provides this information.

* According to 23andme.com, the average African American is 75 percent sub-Saharan African, 22 percent European and only 0.6 percent Native American.

The message is, of course, that you never know.  Jack Goins, Hawkins County, Tennessee archivist,  is the perfect example.  Jack is the patriarch of Melungeon research.  His Goins family was Melungeon, from Hawkins County, Tennessee.  Jack founded the Melungeon DNA projects several years ago which resulted in a paper, co-authored by Jack (along with me, Janet Lewis Crain and Penny Ferguson), cited by Henry Louis Gates in his above article along with an associated NPR interview, titled “Melungeons, A Multiethnic Population.” 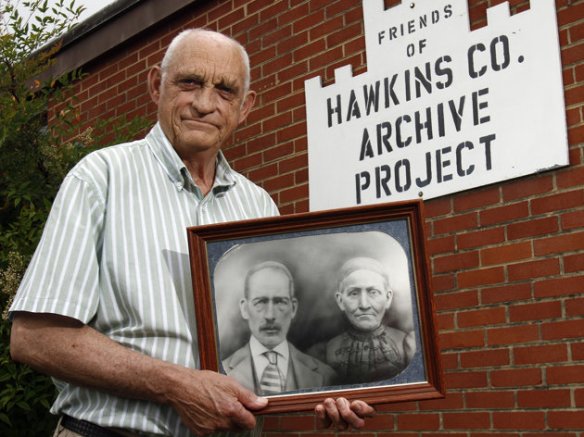 Jack, shown above with the photo of his Melungeon ancestors, looks white today.  His family claimed both Portuguese and Indian heritage.  His ancestors and family members in the 1840s were prosecuted for voting, given that they were “people of color.”

But Jack’s Y DNA, providing us with his paternal link to his Goins male lineage, is African.  No one was more shocked at this information than Jack.  Jack’s autosomal DNA testing confirms his African heritage, along with lots of European and a smidgen of Native in some tests.

When in doubt, test your DNA and that of selected relatives to document your various lines, creating your own DNA pedigree chart.  For a broad spectrum picture of your DNA and ethnicity across of all of your heritage, autosomal DNA testing is the way to go.  Without all of these tools, neither Jack nor Henry would ever have known their own personal truth.