This week, published in Science, we find another ancient DNA full genome sequence from Siberia in an article titled “Genomic structure in Europeans dating back at least 36,200 years” by Seguin-Orlando et al.. This sample, partially shown above, is quite old and closely related to the Mal’ta child, also found in Siberia from about 24,000 years ago. Interestingly enough, K14 carries more Neanderthal DNA than current Europeans. This skeleton was actually excavated in 1954, but was only recently genetically analyzed.

From the paper, this map above shows the locations of recently analyzed ancient DNA samples.  Note that even though K14 and Mal’ta child are similar, they are not located in close geographic proximity.

Also from the paper, this chart of population clusters is quite interesting, because we can see which of these ancient samples share some heritage with today’s indigenous American populations, shown in grey. UPGH=Upper Paleolithic Hunter-Gatherer, MHG=Mesolithic Hunter Gatherer, which is later in time that Paleolithic, and NEOL=Neolithic indicating the farming population that arrived in Europe approximately 7,000-10,000 years ago from the Middle East

Felix Chandrakumar is currently preparing the K14 genome for addition to the ancient DNA kits at GedMatch.  It will be interesting to see if this sample also matches currently living individuals.

Also from the K14 paper, you can see on the map below where K14 matches current worldwide and European populations, where the warmer colors, i.e. red, indicated a closer match.

Of interest to genealogists and population geneticists, K14’s mitochondrial haplogroup is U2 and his Y haplogroup is C-M130, the same as LaBrana, a late Mesolithic hunter-gatherer found in northern Spain. Haplogroup C is, of course, one of the base haplogroups for the Native people of the Americas. 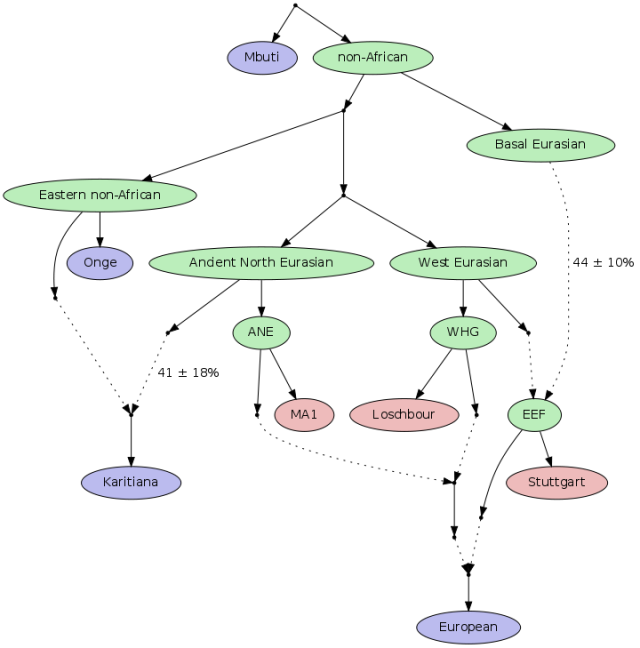 K14 adds to this diagram in the following manner, although the paths are flipped right to left.

Dienekes wrote about this find as well, here.

The origin of contemporary Europeans remains contentious. We obtain a genome sequence from Kostenki 14 in European Russia dating to 38,700 to 36,200 years ago, one of the oldest fossils of Anatomically Modern Humans from Europe. We find that K14 shares a close ancestry with the 24,000-year-old Mal’ta boy from central Siberia, European Mesolithic hunter-gatherers, some contemporary western Siberians, and many Europeans, but not eastern Asians. Additionally, the Kostenki 14 genome shows evidence of shared ancestry with a population basal to all Eurasians that also relates to later European Neolithic farmers. We find that Kostenki 14 contains more Neandertal DNA that is contained in longer tracts than present Europeans. Our findings reveal the timing of divergence of western Eurasians and East Asians to be more than 36,200 years ago and that European genomic structure today dates back to the Upper Paleolithic and derives from a meta-population that at times stretched from Europe to central Asia.

You can read the full paper at the two links below.

It’s been a great year for ancient DNA analysis and learning about our ancestral human populations.

However, I have one observation I just have to make about this particular find.

What amazing teeth. Obviously, this culture did not consume sugar!