During a visit to Claiborne County, TN is the 1980s, I happened across a scrapbook that had been contributed to the library. Inside the scrapbook were old clippings from the Claiborne Progress Newspaper that related to the residents and includes a group of historical articles.  I copied the entire scrapbook, although many of the articles were not in good shape.  I’ve found this treasure trove again recently as I was cleaning out some files, and have been transcribing the articles to preserve them.  Unknown to me at that time, the Claiborne Progress burned in 1923, so there are no archived newspapers.  Judging from surrounding articles, this article was probably from 1912-1916.

A Pioneer Home Goes Up in Smoke

“Holly Hill” or the Patterson home burned last Saturday night and was destroyed. The fire was discovered by 8 o’clock and flames when first seen were coming from the dining hall roof.  The fire had been in the ?? since the dinner hour.  How the fire originated will never be known but supposition that the match and the rat is responsible.  Insurance to the amount of $25,000 was carried on the building and furniture.  Comparatively nothing was saved.

The old Patterson home was situationed three ?? (probably miles) from the Gap. The brick portion was built by Elisha Walden in the early part of the last century and owned by his son John Walden until 1836 when it was purchased by Frances Patterson and his son James M. Paterson and has been in the hands of the family every since.

Probably no old home in this county has more interesting historical association connections with it. (missing)  Patterson home was never a hotel, it is safe to say that thousands of travelers, stock ?? and soldiers have slept under its roof (missing)

Almost under the ruins their lies the bones of a confederate soldier whose grave was covered with white roses, peonies, scarlet and yellow tulips. A little farther away is the grave of Horse Shoe Jim, an Indian Chief killed in an Indian attack and buried by Walden and his slaves.  On the State Road near the ruins is a grave marked on a crude tombstone “William Robinson, killed by Indians in 1786”.  The Indians had stolen Robinson’s horses in Virginia and he with others had followed them to their Indian village.  He became separated from his friends and was shot from a cane brake.  He wrote his on an oak tree with his own blood.  When found he was buried on the spot.

Roberta’s note: Elisha Walden is also known as Elisha Wallen.  Patterson Crossroads today is just east of the intersection of highways 63 and 25E. The “State Road” is now highway 25E.

Robinson was killed at Butcher Springs, just north of Arthur and you can see pictures of this area in my article about Lazarus Dodson who later owned this land.

On the map below, Butcher Springs is marked with the red balloon and you can see Patterson Crossroads in the upper right corner. 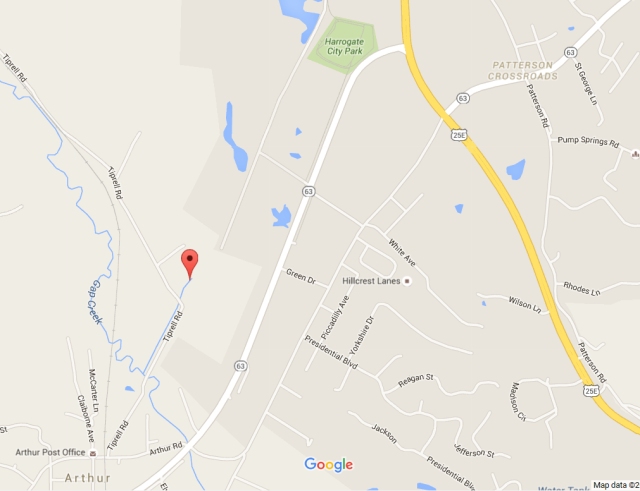 If this history is correct and Robinson did follow the Indians to their village, this tells is that the location of Butcher Springs, which is an excellent headwater on a flat area would have been the location at one time of an Indian village. 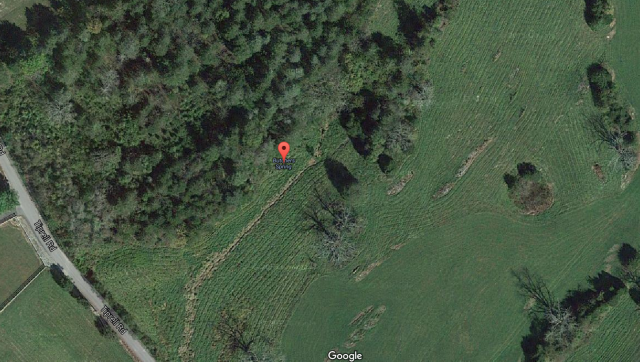 This overview shows Butcher Springs, Patterson Crossroads just east of 63 and 25E and Cumberland Gap at the top. 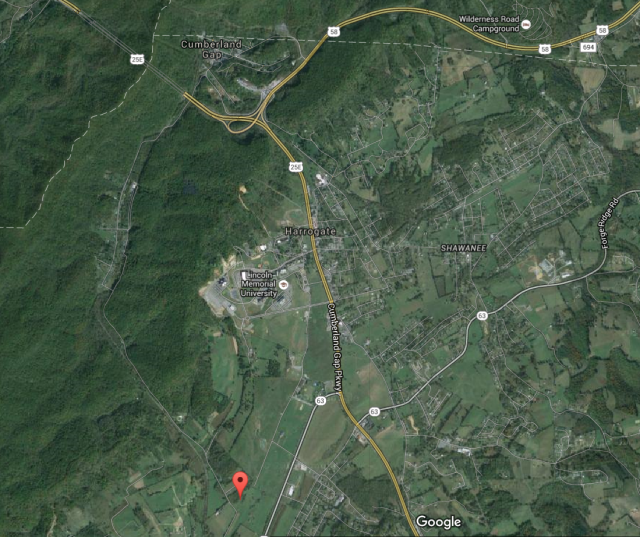