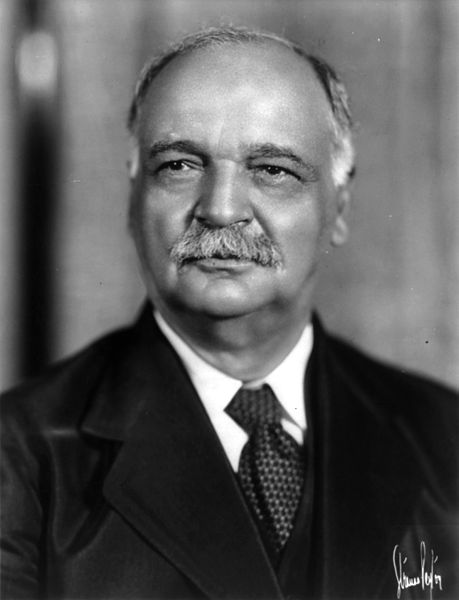 Charles Curtis (January 25, 1860 – February 8, 1936) was a United States Representative, a longtime United States Senator from Kansas later chosen as Senate Majority Leader by his Republican colleagues, and the 31st Vice President of the United States (1929–1933). He was the first person with significant acknowledged Native American ancestry and the first person with significant acknowledged non-European ancestry to reach either of the two highest offices in the United States government’s executive branch. He was enrolled in the Kaw tribe and his maternal ancestry was three-quarters Native American: Kaw, Osage and Pottawatomie.  His father was European-American. Curtis spent years of childhood living with his maternal grandparents on their Kaw reservation.

Born on January 25, 1860 in Topeka, Kansas Territory, prior to its admission as a state in January 1861, Charles Curtis is notable as an Executive Branch officer born in a territory rather than a state of the Union. Curtis was nearly half American Indian in ancestry. His mother, Ellen Papin (also spelled Pappan), was one-fourth French, one-fourth Kaw, one-fourth Osage, and one-fourth Pottawatomie.  His father, Orren Curtis, was an American of English, Scots and Welsh ancestry. His paternal grandparents were William Curtis and Permelia Hubbard. William’s parents were Thomas Curtis and Eunice Peet from early Connecticut. On his mother’s side, Curtis was a descendant of the chiefs White Plume and Pawhuska, of the Kaw and Osage, respectively.

From his mother, Curtis first learned French and Kansa. As a boy living with his mother and her family on the Kaw reservation, he started racing horses. Curtis was a highly successful jockey in prairie horse races.  On June 1, 1868, one hundred Cheyenne warriors invaded the Kaw Reservation.  Terrified white settlers took refuge in nearby Council Grove. The Kaw men painted their faces, donned their regalia, and rode forth on horseback to meet the Cheyenne. The two Indian armies put on a military pageant featuring horsemanship, war cries, and volleys of bullets and arrows. After four hours, the Cheyenne retired with a few stolen horses and a peace offering of coffee and sugar by the Council Grove merchants. Nobody was hurt on either side. During the battle, the mixed-blood Kaw interpreter, Joe Jim, galloped 60 miles to Topeka to request assistance from the Governor. Riding along with Joe Jim was eight-year old Curtis (also called “Indian Charley”).

Curtis’ mother had died in 1863 when the boy was three. His father remarried and divorced, then married again. The elder Curtis was imprisoned because of an event during his service in the American Civil War. During this time, Charles was cared for by both sets of grandparents. His Curtis grandparents helped him gain possession of his mother’s land in North Topeka, which he inherited despite his father’s attempt to gain control of the land.

Curtis was strongly influenced by both sets of grandparents. After living on the reservation with his maternal grandparents, Julie Gonville and M. Papin, Curtis returned to Topeka. He lived with his Curtis grandparents while attending Topeka High School. Both his grandmothers encouraged him to get an education.

Afterward Curtis read law in an established firm and worked part-time. Curtis was admitted to the bar in 1881. He commenced practice in Topeka and served as prosecuting attorney of Shawnee County, Kansas from 1885 to 1889.

As an attorney, Curtis entered political life at the age of 32, winning multiple terms from his district in Topeka, Kansas, starting in 1892 as a Republican to the US House of Representatives. He was elected to the US Senate first by the Kansas Legislature (in 1906), and then by popular vote (in 1914, 1920 and 1926), serving one six-year term from 1907 to 1913, and then most of three terms from 1915 to 1929 (when he became Vice President). His long popularity and connections in Kansas and national politics helped make Curtis a strong leader in the Senate; he marshaled support to be elected as Senate Minority Whip from 1915–1925 and then as Senate Majority Leader from 1925–1929. In these positions, he was instrumental in managing legislation and accomplishing Republican national goals.

Curtis ran for Vice-President with Herbert Hoover as President in 1928. They won a landslide victory. Although they ran again in 1932, the population saw Hoover as failing to alleviate the Great Depression, and they were defeated by Franklin D. Roosevelt and John Nance Garner.

Charles Curtis married Annie Elizabeth Baird (1860–1924), with whom he had three children: Permelia Jeannette Curtis, Henry “Harry” King Curtis and Leona Virginia Curtis. He and his wife also provided a home for his half-sister Theresa Permelia “Dolly” Curtis and then after her mother died in 1924.

A widower when elected Vice President in 1928, Curtis had his half-sister “Dolly” Curtis Gann live with him in Washington, DC and act as his hostess for social events. To date, Curtis is the last Vice President who was unmarried while in office.

Curtis decided to stay in Washington, D.C. to resume his legal career as he had a wide network of professional contacts from his long career in public service.

He died there on February 8, 1936 from a heart attack. By his wishes, his body was returned to his beloved Kansas and buried next to his wife at the Topeka Cemetery.