I’m always grateful when one of our readers send me original Native documents with names.  In this case, hat tip to Yvonne for sending me this information about the Onieda Tribe #88, Improved Order or Redmen, also called the Independent Order of Redmen from Staunton, Va.

Yvonne found this suit at the Virginia archives in the Chancery suits for Augusta Co., VA. 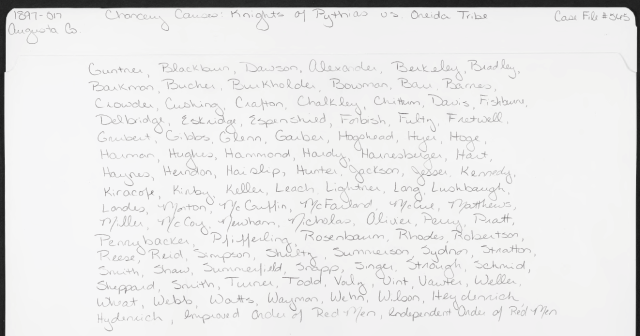 On November 1, 1894, the suit states that a group of men formed an unincorporated voluntary association called the Oneida Tribe #88, who purchased, then leased space in a building to other groups, one of which was suing them. 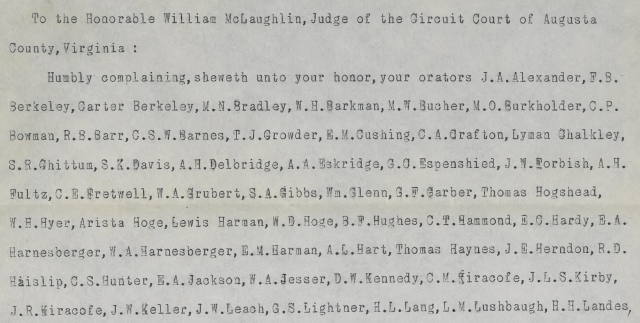 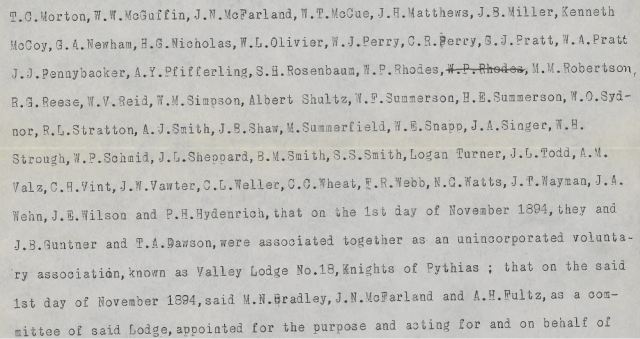 First, I found it odd to find Oneida in Virginia, and second, the number 88 threw me.  I read through the first few pages of the document, shown above, and then I decided to see what I could find about this tribe.  What I found was shocking.

The Independent Order of Red Men weren’t Indians at all, although many of their rituals were indeed based on those of Native Americans.  They were white men who formed a fraternal organization by that name.

The Improved Order of Red Men traces its origin to certain secret patriotic societies founded before the American Revolution. They were established to promote Liberty and to defy the tyranny of the English Crown. Among the early groups were: The Sons of Liberty, the Sons of St. Tammany, and later the Society of Red Men.

Their rituals and regalia are modeled after those used by Native Americans. The organization claimed a membership of about half a million in 1935, but has declined to less than 38,000.

On December 16, 1773, a group of men—all members of the Sons of Liberty—met in Boston to protest the tax on tea imposed by England. When their protest went unheeded, they disguised themselves as Mohawk Indians, proceeded to Boston harbor, and dumped overboard 342 chests of English tea. (See Boston Tea Party.)

However, for the next 35 years, each of the original Sons of Liberty and Sons of St. Tamina groups went their own way, under many different names. In 1813, at historic Fort Mifflin, near Philadelphia, several of these groups came together and formed one organization known as the Society of Red Men. The name was changed to the Improved Order of Red Men in Baltimore in 1834. In the late 18th century, social and benevolent Tammany Societies, named after Tamanend, were formed. The most famous of these was New York City’s Society of St. Tammany, which grew into a major political machine known as “Tammany Hall.” Around 1813, a disenchanted group created the philanthropic “Society of Red Men” at Fort Mifflin in Philadelphia. From this, the “Improved Order of Red Men” was later formed as a working man’s drinking group similar to the Odd Fellows fraternal organization.

In 1886, its membership requirements were defined in the same pseudo-Indian phrasing as the rest of the constitution:

“ Sec. 1. No person shall be entitled to adoption into the Order except a free white male of good moral character and standing, of the full age of twenty-one great suns, who believes in the existence of a Great Spirit, the Creator and Preserver of the Universe, and is possessed of some known reputable means of support.”

The restriction to white males remained until 1974 when the “all white” clause was eliminated.

The Order has a three tiered structure. Local units are called “Tribes” and are presided over by a “Sachem” and a board of directors. Local meeting sites are called “Wigwams”. The state level is called the “Reservation” and governed by a “Great Sachem” and “Great Council” or “Board of Chiefs”. The national level is the “Great Council of the United States”. The Great Council consists of the “Great Incohonee” (president), and a “Board of Great Chiefs”, which includes the “Great Senior Sagamore” (first vice-president), “Great Junior Sagamore”, “Great Chief of Records” (secretary), “Great Keeper of the Wampum” and “Prophet” (past president). The headquarters of the Order has been in Waco, Texas, since at least 1979.

So, of your family tells you that your male ancestor was a member of an Indian tribe, it may well be true, but it may not be the kind of tribe you had in mind.