One great thing about publishing stories about historical items is that often, they encourage other people with additional information to come forth.  That’s what happened recently when I published a series of stories about the Dare Stones supposedly related to Sir Walter Raleigh’s Lost Colony.  Rod Mann, with Albemarle Genealogical Society, stepped forward to share some additional information about yet another “Dare Stone,” of sorts.  The large stone, shown below, is purported to be the gravestone of Ananias Dare and the smaller stone, to hold a map. 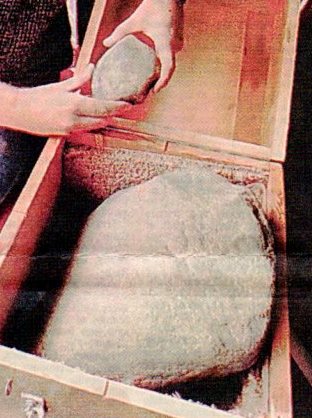 We know that the original Dare Stone was found near Edenton in 1937, followed by the series of stones, 2-48, that were exposed as frauds after Dr. Pearce of Breneau College (now University) offered to pay $500 for any additional inscribed stones.  The stones, 2-48, were not found in the Edenton area, but significantly further south, in South Carolina and Georgia.

Rod contributed a 1994 article from the Virginia Pilot.  I’ve included the article in its entirety at the end of this article.  Of particular interest is the map showing the location of the original Dare Stone find and this second stone, purported by history buff, George Carl Jr. to be the gravestone of Ananias Dare. 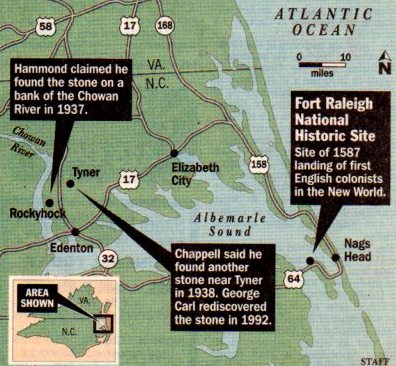 This “gravestone” stone was also originally found near Edenton, not far from the location of the original Dare Stone.  In fact, it was originally found in 1938 by a Chowan County farmer, H.L. Chappell who offered it to Pearce, hoping to claim a $500 reward, but was then rebuffed.  Chappell then ditched the rock along the Perquimans River on his farm where Carl rediscovered it more than 50 years later.

Carl says that in the right light, he can see the date 1591 and the initials EWD inscribed.  Others, including park rangers and archaeologist, David Phelps, now deceased, but at that time with ECU, cannot.

Carl says that some of his friends have also reported that they can see the word Ananias inscribed as well, of course suggesting that the stone is the gravestone of Ananias Dare, whose death was reported on the original “Dare Stone” found in the same vicinity.  The original Dare Stone said that Ananias was buried “neere fovre myles easte this river upon small hil names writ all ther on rocke.”

Experts such as now deceased Phelps say that there is no evidence to suggest that colonists ever used engraved stones to mark grave sites.  While that is true, if this were a marker for Ananias Dare, it certainly wasn’t a normal situation.  Eleanor Dare would have been trying to leave her father “bread crumbs” to follow her trail…hence the “Dare Stone” itself.

Carl then found another rock while canoeing that he says appears to be a map of Roanoke Island.  David Phelps says that it’s likely a natural occurrence.  Others have been equally as dismissive.

As the newspaper article points out, there is institutional bias against inscribed stones.  The entire “Dare Stone” fiasco was extremely embarrassing to many people as well as Breneau University.  Most people just wanted to forget the entire episode, so any newly appearing rocks bear a far greater burden of proof that any other type of artifact would bear in other situations.  On top of that, the Lost Colony, an unsolved romantic mystery, attracts many people with theories or stories of all descriptions.  Because it’s nearly unprovable and possibly unsolvable, it’s very safe to speculate and propose theories, because your theory is as good as the next one and none of them can be proven or disproven.

In fact, I was recently contacted by Jesus Christ himself, by e-mail, telling me that the Lost Colony was in fact part of the Lost Tribe of Israel.  And no, I’m not kidding.  That is what this person said and they were dead serious.

Hence, the high degree of skepticism in professional circles.

Having said this, I don’t think it’s wise to dismiss every or any claim because they might be fanciful.  I did, however, dismiss the possibility that aliens picked up the colonists, as proposed by another theorist, mostly because it’s unprovable, unless of course we find an inscribed rock with a picture of the aliens and the spacecraft.  In this case, however, the rocks are close enough and in the right context that they might be authentic.  Rocks weather over time, so the writing, if it existed, could be in very poor condition now, and nearly unreadable.

Rod took things one step further and did some work on his own.

Below is a photo of the second rock discovered by Carl on his canoe trip that he believes is a map. 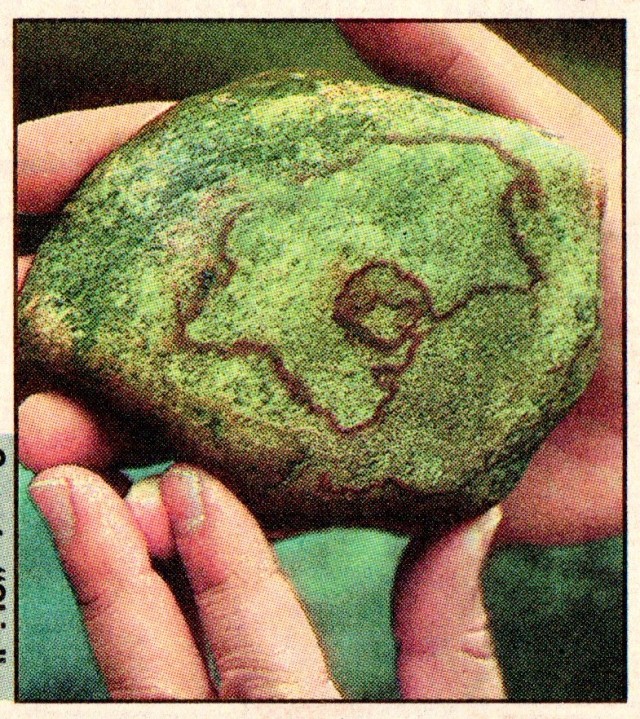 Here is the John White Map showing Roanoke Island and the Albemarle Sound area towards current Edenton and Currituck Sound which is north of Albemarle Sound inside the barrier islands in Virginia.

Here is an aerial view of Currituck Sound with an area we’ll discuss circled by Rod. 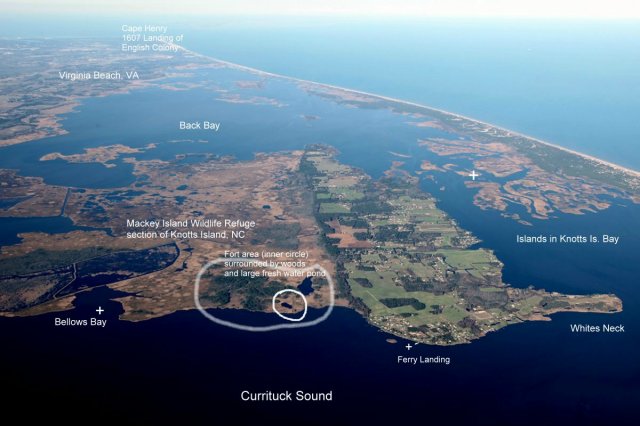 Here’s Rod’s overlay of the Roanoke map stone discovered by Carl with the above map locations of Currituck Sound.

Why could this be important?

Back in 1923, a surveyor drew a map of Knott’s Island that showed a fort structure in almost this exact location, if indeed this rock is a map and not a natural phenomenon.  Today, unfortunately, the fort location, if it was that and not a natural phenomenon, is underwater.  You can see the fort shape on the map below on the right by Partridge Point and Indian Creek. 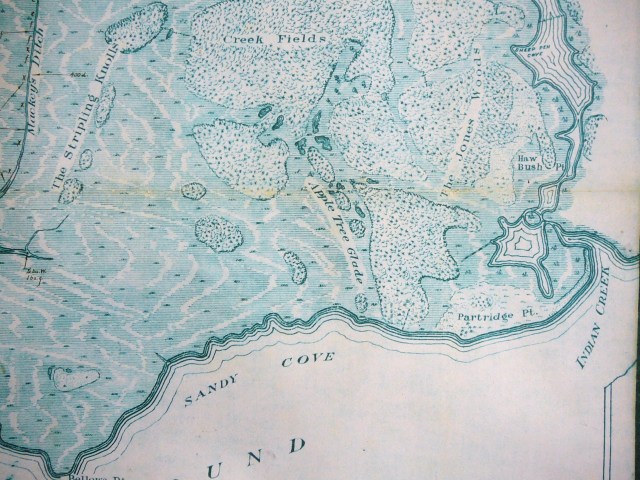 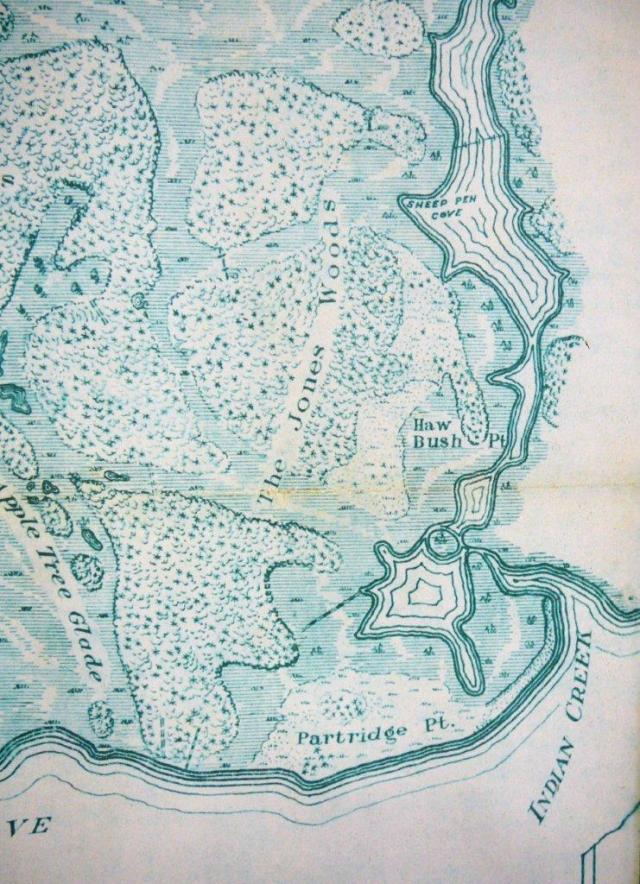 Remember, we don’t know where the colonists settled after they left Roanoke Island.  White says they were preparing to go 50 miles into the main.  Certainly Knott’s Island would not be outside the scope of possibility at about 40 miles by water and it would be a location where the colonists could watch for approaching ships.

On the map below, we see Knott’s island, the red “A” balloon and then Edenton and Roanoke Island with red arrows and Buxton, on Hatteras Island near the bottom.  Hatteras Island is where the Croatoan Indians lived and where it’s widely believed that the colonists went, at least initially, based on the message they left carved on a tree and stockade post on Roanoke Island. 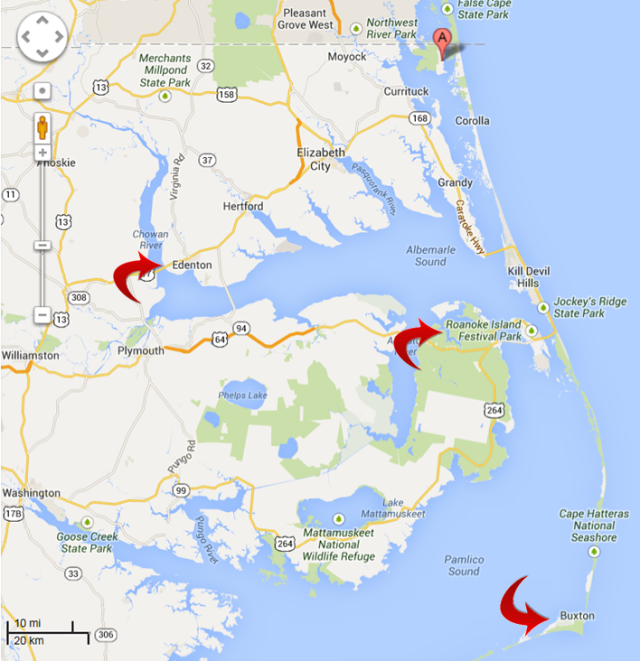 We still don’t know where the colonists went when they left Roanoke Island.  The 1923 map is credible, created by a surveyor, but we don’t know why that area near Indian Creek was shaped the way that it was.  In other words, it could have been natural, not manmade.

The gravestone found by Mr. Carl, questionable, and I’m assuming here that Mr. Carl is credible.  If he was going to fake a stone, he could do a much better job with a few crude tools.  Technology today might be able to shed a better light on the purported gravestone than was available in 1994, although it’s unclear whether the Park Service still has the stone or whether it was returned at some time to Mr. Carl.  Additionally, the evidence would have to be nearly irrefutable for any academic professional in any field to even suggest that it’s possible for the stone to be genuine, given the embarrassing past history with Dare Stones 2-48.  Without some prodding, and funding, the stone is likely to rest in oblivion forever, much like the colonists.

The map stone found by Mr. Carl, interesting, but certainly not conclusive, although the overlay map done by Rod Mann is extremely suggestive.  Still, it could simply be a coincidence. It would be much more compelling if the map had been “on” the gravestone or even near the gravestone.

So what we have here isn’t a solution.  The mystery hasn’t been solved.  If anything, it has been deepened.  That seems to be the overarching theme of the Lost Colony.  But you have to admit, it’s very, VERY interesting.

Our thanks to Rod Mann for his research and contributions. 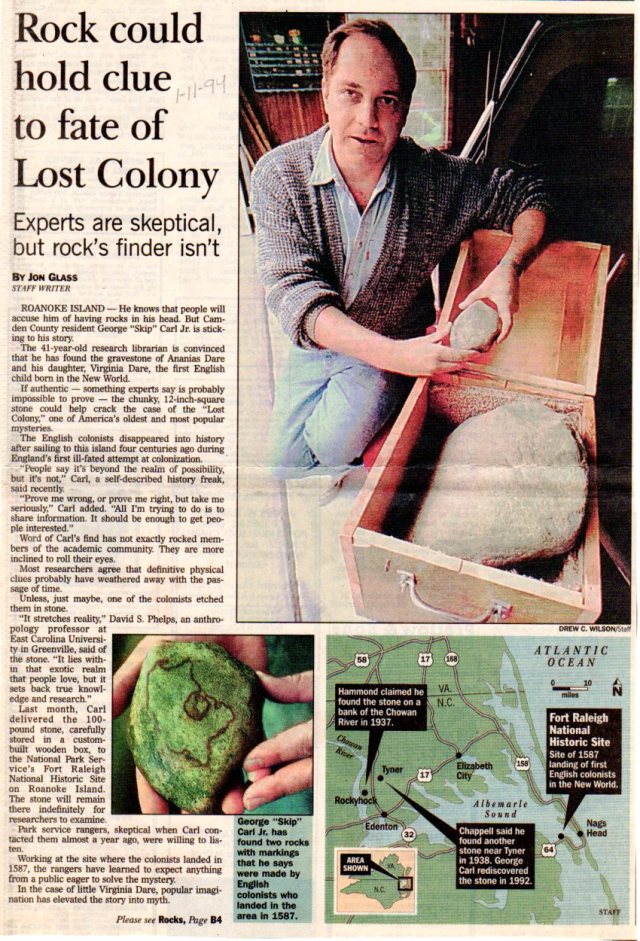 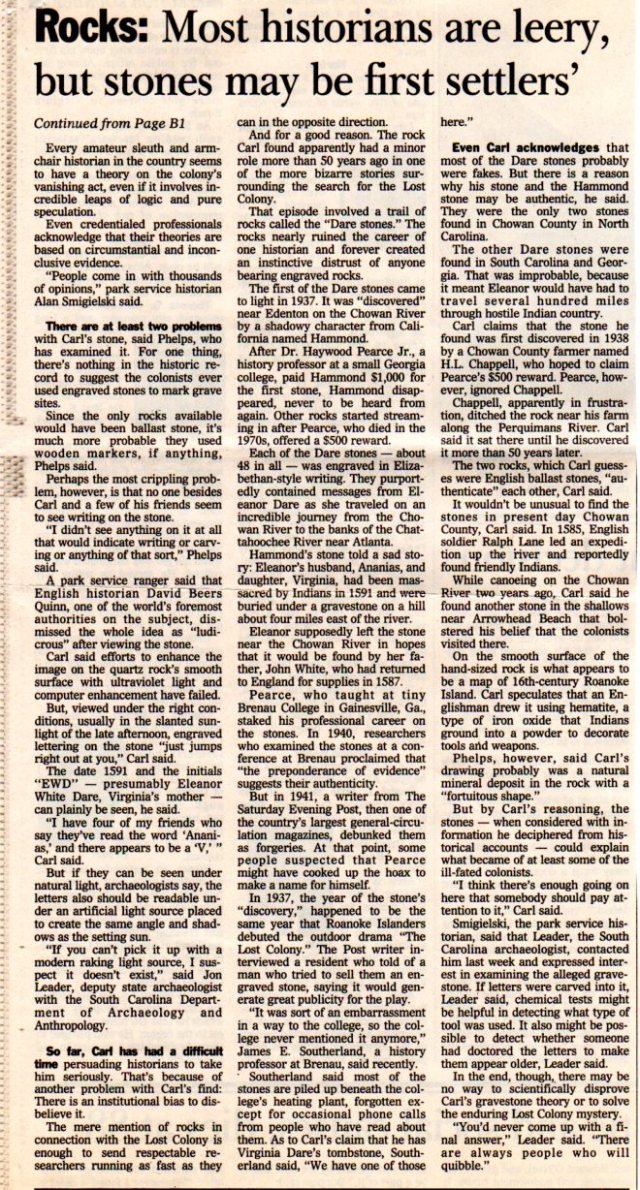