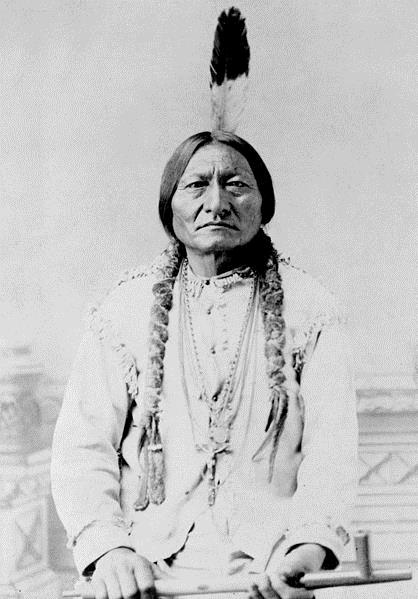 It was 123 years ago today, December 15, 1890, that Sitting Bull (shown above in 1885) was killed by Indian agency police on the Standing Rock Indian Reservation during an attempt to arrest him for supporting the Ghost Dance movement.  During the ensuing struggle between Sitting Bull’s followers and the agency police, at 5:30 in the morning, Sitting Bull was shot in the side and head by Standing Rock policemen Lieutenant Bull Head (Tatankapah) and Red Tomahawk (Marcelus Chankpidutah) after the police were fired upon by Sitting Bull’s supporters. His body was taken to nearby Fort Yates for burial, but in 1953, his remains were possibly exhumed and reburied near Mobridge, South Dakota, by his Lakota family, who wanted his body to be nearer to his birthplace.

Until listening to this video, I never realized that Sitting Bull was betrayed by one of his own people, Henry Oscar One Bull, who was looking to make a name for himself.

Ernie LaPointe, Sitting Bull’s lineal great grandson, tells his great grandfather’s oral history. In this film clip he tells who the family holds most responsible for the death of Sitting Bull. Full two part DVD series available at http://www.reelcontact.com. This clip is from part two of ‘The Authorized Biography of Sitting Bull By His Great Grandson”.

At this link, you will find two videos, towards the bottom of this page.  Ignore the ad under the title, it has nothing to do with the LaPointe videos.