Chief American Horse (the younger) is one of the Indian Chiefs listed as either a visitor or a student at the Carlisle School.

Chief American Horse was Oglala Lakota, born in 1840 in the Black Hills of South Dakota, he died in 1908 on the Pine Ridge Reservation.  His adult Native name was Wasicun Thasunke, or, “He Has a White Man’s Horse.”  His childhood Native name was Manishnee or “Cannot Walk” or “Played Out.”  His nickname was Spider.  He was the son of Sitting Bear (father) and Walks With (mother.)  His wife was the daughter of Chief Red Cloud.  His children were Ben American Horse, Samuel American Horse and Maggie Stands Looking.

He was a US Army Scout and a progressive leader who promoted education for his people and friendly association with whites.  He was one of the first Native people to participate in Buffalo Bill’s Wild West show and he supported the Carlisle Indian School. 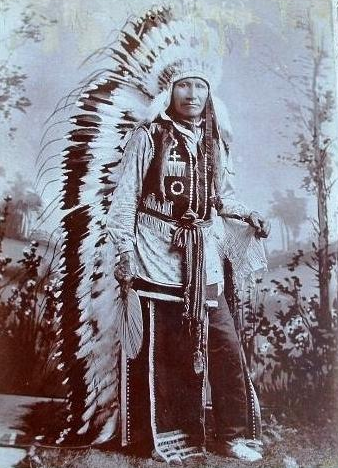 Today we might think of the Buffalo Bill show as exploiting Native people, but Buffalo Bill treated Native American employees as equals with white cowboys. Wild Westers received good wages, transportation, housing, abundant food and gifts of clothing and cash from Buffalo Bill at the end of each season. Wild Westers were employed as performers, interpreters and recruiters. Men had money in their pockets and for their families on the reservation. Female performers were paid extra for infants and children and supplemented wages by making and selling Lakota crafts.  Shows hired venerable elder male Indians to appear in the parades to ensure that young men acted with consideration and politeness when visiting host communities, and rules were self-policed by traditional Oglala Lakota chiefs and former U.S. Army Indian Scouts. Known as “Show Indians”, Oglala Wild Westers referred to themselves as “Oskate Wicasa” or “Show Man”, a title of great honor and respect.  Since 1887, Wild Westing has been family tradition with several hundred Pine Ridge families, and the tradition of the Wild Wester community is not unlike the tradition of circus families and communities. American Horse’s sons Ben American Horse and Samuel American Horse were Carlisle Wild Westers and interpreters.

Chief American Horse also supported The Carlisle Indian Industrial School in Carlisle, Pennsylvania, which was the model Indian boarding school in the United States from 1879 through 1918. Carlisle was the first Indian boarding school located far from the reservation, in an Eastern environment free of the West’s anti-Indian prejudices and free from the influences of native cultures.  Carlisle offered a path of opportunity and hope at a time when people believed Native Americans were a vanishing race whose only hope for survival was rapid cultural transformation. Carlisle was founded on principle that Native Americans are the equals of whites and that Native American children immersed in white culture would learn skills to advance in society. Through the years, Carlisle evolved from an industrial trade school to a preparatory school with unique endowments and faculty. Attending Carlisle is considered by many Native Americans like going to Harvard, Yale or Oxford, and the family tradition of Carlisle alumni as “Harvard style” is one of pride and stories of opportunity and success.  Carlisle was a unique school and produced a new generation of Native American leadership.  While this interpretation of Carlisle is not shared by all, it certainly had the support of many Native American Chiefs who sent their children, family and tribal members when it opened in 1879 (photo below) and thereafter. 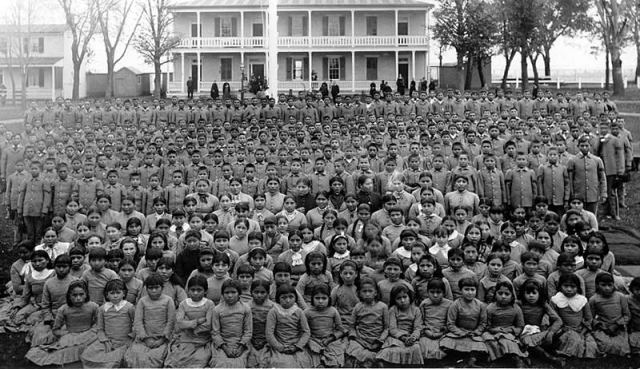 Maggie Stands Looking wrote a letter to her father through an interpreter.

“Carlisle Barracks, PA, Jan. 24, 1881. My dear father: AMERICAN HORSE:- I want to tell you something, and it makes me feel very glad. You tell me that my brother is married and that makes me feel very glad. My cousins, and brothers, and I are all very well, at this Carlisle School. We would like to see you again. I am always happy here, but lately I sometimes feel bad, because you tell me that my grandfather is getting very old. Tell me how my brothers are. I would like to see my brother’s wife’s picture. Tell my brother Two-Dogs to write to me again. Miss Hyde’s father died two weeks ago, and I am very sorry. I remember all of my friends. If you don’t answer my letter soon, I’ll feel bad. I don’t always answer your letter soon, but it is because I can not write. As soon as I get so that I can write myself, I will write as often as I can. Tell Brave Bull that Dora (Her Pipe) has been a little sick, but is most well now. Tell if my grandfather is well. If he gets sick tell me. You wrote to my cousin Robert and told him that you had a house to live in, and lots of pigs and cows and such things, and I was very glad. You’ve got a white man’s house to live in now and I am anxious to learn all that I can, so that I can come home by and by and live with you. I hear that they have a big school out there and it makes me very glad. If you can, come again, and tell me if you can come again, when. I want to tell you that some more girls and boys came here. Twenty-five. Fifteen of them are girls. There are a great many of us here now, and Capt. Pratt is very kind to us. That is all I want to say now. Give my love to all of my friends. Your daughter, Maggie Stands-Looking.”

Maggie Stands Looking was among the first wave of children brought from Rosebud. According to Pratt in his book, “Battlefield and Classroom,” Maggie had difficulty adjusting to the demands of her new lifestyle at Carlisle. She once slapped Miss Hyde, the matron, when Hyde insisted that Maggie make her bed every day and keep her room clean. Instead of retaliating, Miss Hyde stood her ground and Maggie acquiesced.

Like most of the Carlisle students, Maggie was enrolled in the Outing Program. Instead of returning the Indian children to their families during the summer months, the detribalizing process was continued by placing them for hire with non Indian families. After her arrival to her country home, Maggie wrote this letter to the Superintendent:

“Dear Captain Pratt: What shall I do? I have been here two weeks and I have not bathe. These folks have no bath place. Your school daughter, MAGGIE STANDS LOOKING” Pratt advised her to do as he had done on the frontier…[after] filling a wash basin with water and “rubbing myself well, have had a bath that made me feel as good as jumping into a river.” He signed his letter – “Your friend and school father,” R.H. Pratt.

Other students with the last name, American Horse at Carlisle included two with only that name, no first name, then Alice, Benjamin (the son of Chief American Horse), Robert, Lucy and Sophia.  American Horse’s son Samuel is listed in family records as a Carlisle student, but I did not find him listed in the Carlisle records, although they are not complete and not in one location.

Chief American Horse attended several peace conferences in Washington DC between 1865 and 1877 and advocated yielding to the government, convinced of the futility of further resistance. He was known for his eloquence which was typically conciliatory, but he also had some very sharp works for the whites and their duplicity.

In 1905, several Indian Chiefs as well as the Carlisle band attended the inauguration of Teddy Roosevelt.

Theodore Roosevelt sat in the presidential box with his wife, daughter and other distinguished guests, and watched West Point cadets and the famed 7th Cavalry, Gen. George A. Custer’s former unit that fought at the Battle of Little Bighorn, march down Pennsylvania Avenue.

When the contingent of Wild Westers and the Carlisle Cadets and Band came into view (above), President Roosevelt vigorously waived his hat and all in the President’s box rose to their feet to behold the powerful imagery of the six famous Native American Chiefs on horseback adorned with face paint and elaborate feather headdresses, followed by the 46-piece Carlisle Indian School Band and a brigade of 350 Carlisle Cadets at arms. Leading the group was Geronimo, in full Apache regalia including war paint, sitting astride his horse, also in war paint, in the center of the street. It was reported that: “The Chiefs created a sensation, eclipsing the intended symbolism of a formation of 350 uniformed Carlisle students led by a marching band,” and “all eyes were on the six chiefs, the cadets received passing mention in the newspapers and nobody bothered to photograph them.”

Chief American Horse was also a Lakota historian and authored a “winter count” he kept on a piece of cloth covering over one hundred years of Lakota history, 1775-1878. Lakota years are conceived as extending from the first snow of a winter to the first snow of the next winter. Years are given names based upon significant or unique event that would be easy to recall.  For example, Chief Flying Hawk’s Winter Count for 1866 records the Fetterman Incident during Red Cloud’s War as “Wasicu opawinge wica ktepi” or “They killed one hundred white men.” Likewise, 1876 is “Marpiya llute sunkipi” or “They took horses from Red Cloud” (the U.S. Army did after the Battle of the Little Big Horn), 1877 is “Tasunka witko ktepi” or “When they killed Crazy Horse” and 1890 is “Si-tanka ktepi” or “When the killed Big Foot” (the Wounded Knee Massacre).

In 1879, American Horse drew the winter count in a sketchbook at the request of William H. Corbusier, an Army surgeon. Corbusier sent it to the Smithsonian together with an explanation of the years provided by the keeper.  An example is shown below, and several more can be viewed in an online Smithsonian exhibit.  American Horse said that the winter count had been kept in his family for generations, passed down from his grandfather, to his father, to him. American Horse was born in the year they stole many horses from the Flatheads, or 1840-41. His death on Dec. 16, 1908 is marked in the No Ears calendar for the year 1908-09.