The ancestral homeland of the Pawnee is Kansas and Nebraska on the Platte River and the Republican Fork of the Kansas River.  However, one branch of the Pawnee, the Skidis, removed to Indian Territory in 1875.  Their chief was Baptiste Bahylle.

Baptiste is listed as one of the chiefs who visited the Carlisle Indian School in Pennsylvania.

In 1884, in testimony taken by the Committee on Indian Affairs of the Senate, Baptiste is stated to be half Mexican and half Pawnee and there are allegations that he is working with cattle companies, along with Nelson Rice who claimed to be a full-blood, who were trying to take possession of the traditional Pawnee lands.  Baptiste accepted 160 acres of land in settlement for his Indian land claim, sold the land and then “stole back to the tribe  and has been receiving full rations and annuity and official pay ever since, and as interpreter for most of the time.”  It also mentions that he went by the name of Bat.

Born about 1830, it appears that Baptiste spent most of his youth in Mexico, according to family genealogical records and oral history.  Baptiste apparently married twice, first to a white woman and second to a Pawnee who was also part Spanish.  Baptiste died on October 25, 1897.

The Echo-Hawk family who descends from Baptiste has put together a wonderful document about the Pawnee removal to Oklahoma.  Included are many first hand accounts of the removal the encampment there and their life afterwards.

One thing I found interesting is this excerpt about the adoption of names from an interview with Nora Pratt in 1982.

“My mother was Lucy Tilden, and she was 107 years old when she passed away in 1965. Everyone knew her as “Grandma Tilden.” She was Skidi, and she and my brother were members of Pahukstatu Clan, Pumpkin Vine. My father, Ezra Tilden, put me and my half-sister into his clan, Tuhwahukasa, Camping On a Hill Clan. My father was also part Kitkahahki and Pitahawirata, and we used to have a lot of visitors from down south.
I call my mother’s family the Washingtons, even though there were a number of names among the different family members and they all had Indian names in Nebraska. Several families were related together. The Lone Chiefs, for instance, are connected to us. A lot of us are related.

I call my grandmother, “Grandma Washington”; she had a mud lodge right up here on the hill. After she passed away, my mother stayed with Lizzie Washington, her aunt. I remember my mother and some of the others used to always talk about a George Washington. One family member might have been named that – but whether he was one of the uncles or my grandmother’s husband, I don’t know. But they used to always talk about a George Washington. That’s who my mother and the others got their name from.”

These photos show Baptiste Bahylle at various points in his life.

Standing: Baptiste Bayhylle (aka The Heavens See Him As A Chief, Pawnee/French interpreter)
Sitting L-R: Man Who Left His Enemy Lying In The Water, His Chiefly Night (aka Night Chief), One Who Strikes The Chiefs First, Sky Chief – Pawnee – 1868

Another photo can be found here. 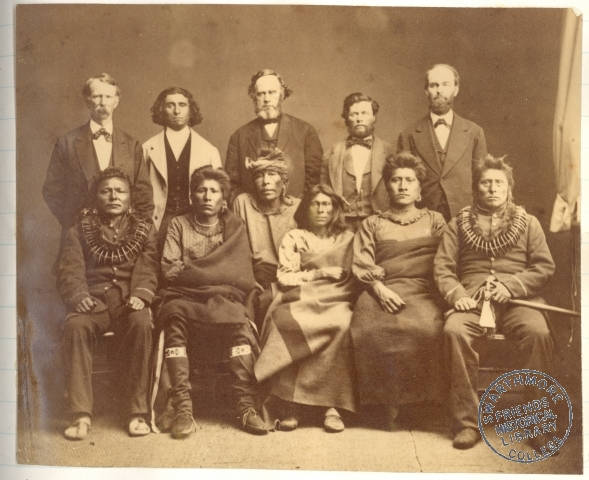 Photograph probably taken in 1871 of a group of Pawnee prisoners that were accused of the murder of a white man, McMurtie, along with their chiefs, interpreters, legal counsel, and Quaker indian agents.

Some of the chiefs who visited the Carlisle School were invisible, with no historical information found about them.  Baptiste Bahylle was anything but invisible.  He was colorful and lived during a transitional period in American and Native history.