In the article, The Jeffreys and Day Families, Cabinetmakers, we discovered that Thomas Day of Caswell County, NC was connected with the Day and Jeffreys families who lived in Orange County, NC, a group of people who were of mixed Native heritage, apparently Occaneechi, who had moved in the early 1800s from Greensville Co., VA.  Thomas himself was born to John and Mourning (Stewart) Day, a mixed race couple.  The Day family was also closely associated with the Jeffreys family whose Indian heritage is documented through court records.  These families would have been listed on the census as free people of color, not as white.

There is no 1790 census for Orange Co., NC, unfortunately, but there is an enumeration with a tax list replacing the census.  On that tax list, there is no Guy family but there are 4 Jeffers; Jacob, Evan, Garner and John.

The 1820 census for Orange County included the following families who were counted as “free negroes.”

The 1830 census of the North District or Orange County, NC shows an entire group of families, free people of color, enumerated together, possibly living adjacent.  It’s also possible that the enumerator simply listed all of the “free colored” together at the end of the census.  Please note that the writing is difficult to decipher in some cases. 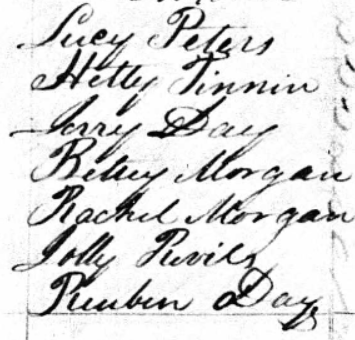 If anyone can help with these family names that are difficult to decipher, I would be very appreciative.

The 1840 census for the Northern District of Orange County is not enumerated with these families together, but they are listed as follows.

In 1849, this portion of Orange County became Alamance County, Va.