Dictionary of the Otchipwe Language, 1853 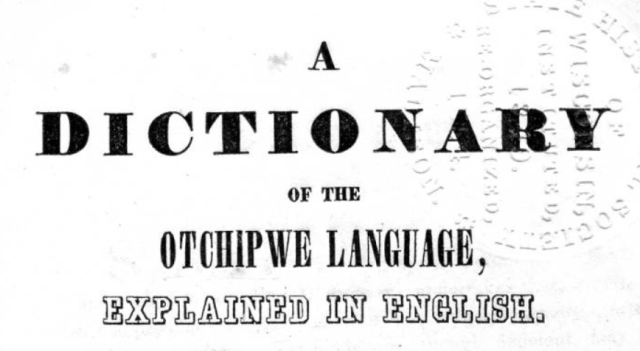 A Dictionary of the Otchipwe Language, Explained in English. This Language is Spoken by the Chippewa Indians, as also by the Otawas, Potawatamis and Algonquins, with Little Difference. For the Use of Missionaries, and Other Persons Living Among the Above Mentioned Indians.  This book was written by Frederic Baraga.  It is owned and copyrighted by the Wisconsin Historical Society.

Fr. Frederic Baraga (1797-1868) was a Roman Catholic priest who left Europe specifically to work with America Indians. When he arrived at La Pointe, Wis., in July of 1835, he was already fluent in Latin, Greek, French, Italian, and German and eager to learn Native American languages. Over the next eight years he built up a congregation of 700 Ojibwe, metis, and French-Canadian followers on Madeline Island. In 1843 he left La Pointe, and spent the remainder of his life ministering to Indian communities in the Upper Peninsula of Michigan.

In 1850 Fr. Baraga published a Theoretical and Practical Grammar of the Otchipwe Language (its full text is online at http://books.google.com/). To complement it, two years later he transcribed his handwritten notebooks into the Ojibwe dictionary given here. The manuscript was nearly lost in March 1852 when, en route to Detroit to have it printed, Baraga and his sleigh plunged through the ice of Green Bay. Arriving at Detroit, he found the printers unable to produce the book and went on to Cincinnati, where he found a publisher. A second edition was issued in 1878, after Baraga’s death, which introduced much extraneous matter and rearranged his original text; this was reprinted by the Minnesota Historical Society in 1992. The first edition given here is preferred by modern linguists.

This is one of several works on American Indian languages to be found at Turning Points in Wisconsin History. Readers should note that this is a historical document rather than a modern one, and that it was produced by a white observer rather than a native speaker; students wishing to study the language should rely on materials produced by the tribal language office.

Thanks to Fletcher for this link.