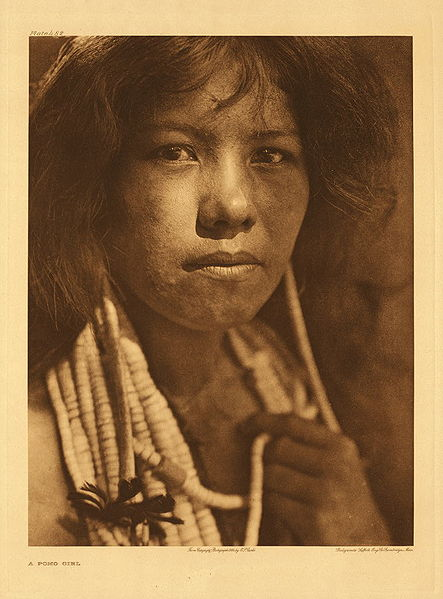 While working with the Carlisle records, I noticed that there were two students listed as Pomo Indians, Emily Moran and Elmer Busch.  I had never heard of the Pomo tribe, so I took a look to see what I could find.  The picture above was taken of a Pomo woman in 1924 by photographer, Edward S. Curtis.

The Pomo people inhabit northern California near Clear Lake and have a strong mythology of creation and world order. It includes the personification of the Kuksu or Guksu healer spirit, spirits from six cardinal directions, and the Coyote as their ancestor and creator god.

The Pomo people participated in shamanism; one form this took was the Kuksu religion that was held by people in Central and Northern California. It included elaborate acting and dancing ceremonies in traditional costume, an annual mourning ceremony, puberty rites of passage, shamanic intervention with the spirit world, and an all-male society that met in subterranean dance rooms.  The Pomo believed in a supernatural being, the Kuksu or Guksu (depending on their dialect), who lived in the south and who came during ceremonies to heal their illnesses. Medicine men dressed up as Kuksu.

A later shamanistic movement was the “Messiah Cult”, introduced by the Wintun people. It was practiced through 1900. This cult believed in prophets who had dreams, “waking visions” and revelations from “presiding spirits” and “virtually formed a priesthood.” The prophets earned much respect and status among the people.

According to some linguistic reconstructions, the Pomo people descend from the Hokan-speaking people in the Sonoma County, California region. This area was where coastal redwood forests met with interior valleys with mixed woodlands. In this hypothesis, about 7000 BCE, a Hokan-speaking people migrated into the valley and mountain regions around Clear Lake, and their language evolved into Proto-Pomo. The lake was rich in resources. About 4000 BCE to 5000 BCE, some of the proto-Pomo migrated into the Russian River Valley and north to present-day Ukiah. Their language diverged into western, southern, central and northern Pomo.

Another people, possibly Yukian speakers, lived first in the Russian River Valley and the Lake Sonoma area. The Pomo slowly displaced them and took over these places.

Recently, analysis of archaeological evidence has suggested that the indigenous historical economy observed by the Spanish at their arrival in the Pomo lands of central California may have first developed during the Mostin Culture period (8500-6300 BP) in the Clear Lake Basin. This was an economy that was based on women processing acorns by mortar and pestle.

In 1800 there were estimated to be 10,000 to 18,000 Pomo in total among 70 tribes speaking seven Pomo languages. The way of life of the Pomo changed with the arrival of Russians at Fort Ross (1812 to 1841) on the Pacific coastline, and Spanish missionaries and European-American colonists coming in from the south and east. The Pomo native to the coastline and Fort Ross were known as the Kashaya. They interacted and traded with the Russians.

The Spanish missionaries moved many of the southern Pomo from the Santa Rosa Plain north to Mission San Rafael at present-day Healdsburg to between 1821 and 1828. Only a few Pomo speakers moved south to Mission Sonoma, the other Franciscan mission, located on the north side of San Francisco Bay. The Pomo who remained in the present-day Santa Rosa area of Sonoma County were often called Cainameros in regional history books from the time of Spanish and Mexican occupation.

In the Russian River Valley, a missionary baptized the Makahmo Pomo people of the Cloverdale area. Many Pomo left the valley because of this. One such group fled to the Upper Dry Creek Area. The archeology surveyors of the Lake Sonoma region believe that European encroachment was the reason why Pomo villages became more centralized; the people retreated to the remote valley to band together for defense and mutual support.  Below, a Pomo Indian in a tule boat in 1924.

The Pomo suffered from infectious diseases brought in by new migrants, including measles and smallpox. They did not have immunity to such diseases and fatalities were high. In 1837 a deadly epidemic of smallpox, originating in settlements at Fort Ross, caused numerous deaths of native people in the Sonoma and Napa regions.

The Russian River Valley was settled in 1850 by the 49ers, and the Lake Sonoma Valley was homesteaded out. The US government forced many Pomo on to reservations so that the new Americans could homestead the former Pomo lands. Some Pomo took jobs as ranch laborers; others lived in refugee villages.

On 15 May 1850, after tensions and raids by a band in the area, the 1st Dragoons US Cavalry attacked a different group of Indians as mistaken punishment. They slaughtered from 60-400 people, mostly women and children of the Clear Lake Pomo and neighboring tribes, on an island in Clear Lake. The event became known as the Bloody Island Massacre.

One of the Pomo survivors of the massacre was a 6-year-old girl named Ni’ka, or Lucy Moore. She hid underwater and breathed through a tule reed. Her descendants formed the Lucy Moore Foundation to work for better relations between the Pomo and other residents of California.

One ghost town in the Lake Sonoma Valley excavations was identified as Amacha, built for 100 people but hardly used. Elder natives of the region remember their grandfathers hid at Amacha in the mid-1850s, trying to evade the oncoming immigrants. They tell that one day soldiers took all the people in the village to government lands and burned the village houses.

From 1891 to 1935, starting with National Thorn, the artist Grace Hudson painted over 600 portraits, mainly of Pomo individuals living near her in the Ukiah area. Her style was sympathetic and poignant, as she portrayed domestic native scenes that would have been fast disappearing in that time.  She and her husband were advocates for Native people.

National Thorn, above, was the first of Grace Hudson’s 684 popular portraits of Pomo individuals.

You can read more about the Pomo at this link:  http://www.mendorailhistory.org/1_redwoods/pomo.htm