Tuscarora Identified by Land and Other Transactions – Part 7

Beginning in 1775, there are a series of deeds for leases to a group of men who each receive deeds separately.

Note, the list of names is repeated 3 times in this deed.  I am listing them once, with notes.

John (I) Hicks, West Whitmell, TerKaRu Nation 1775, underneath this is the list of witnesses, and then the list of other signatures.  Registered in August court 1777 byoath of William King, witness.

James Mitchell (+) (Is this the William Mitchell in the body of the document above?)

William Roberts (x) (not listed in document above) 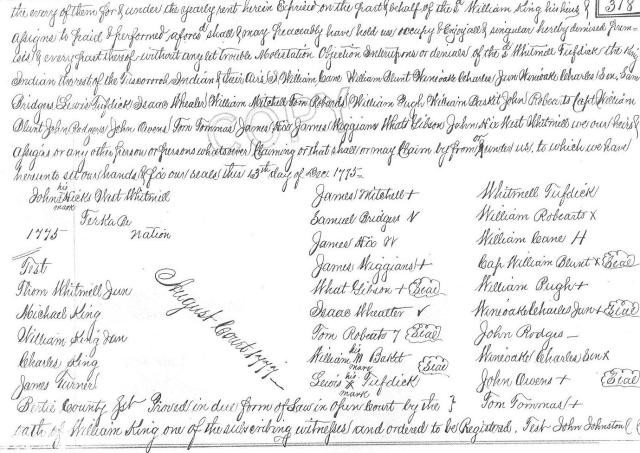 Based on the Indian petition and the date on this deed, this would be the original, valid, deed.

Chiefs of the Tuscarora Indians to Thomas Hunter, yearly rent 8# proclamation money,…Pugh, Williams and Jones corner…head of Chocawench gut….Roanoke River, no acreage given

On the signature page but not mentioned in the body of the deed:

William Rash (the ash is clear, the R is not)

The above two deeds were transcribed from photographs of the deeds.  The balance were from copies of the deeds and were much clearer.

Ben (x) Smith (not listed above)

Note – the list of names is repeated 4 times in the body of the deed.  I have written then once here with notes if they varied.

Some of the men appear to have signed their names.  The rest sign with an X or a mark.

John Hicks (signed) (not shown above)

Bille (S) Smith (not shown above)

Bille (/) Mitchell (not shown above)

James (mark looks like u laying on its left side) Mitchell

Tom Roberts Jr. (unusual mark under his name looks like two fishhooks crossed) (not shown above)

Whitmell Tufdick (signed) (not shown above)

Wineoak Charles Jr. (space says his mark but no mark made)

In the above document, some men are listed who don’t sign, and some sign who aren’t listed.  West Tufdick/Whitmel seems to use both surnames interchangeably.

April 7, 1777, between Whitmill Tufdick, William Roberts, Tom Smith (does not sign below), John Smith, Lewis Tufdick, William Cane and Tom Roberts (does not sign below) Chieftains and Headmen of a nation of Tuscarora Indians inhabiting on Roanoke River in Bertie County and William King, planter, beginning at the mouth of a branch at the lower end of Sesars [Ceasar’s] Neck, up the branch by Tom’s old field….in consideration of the labor by him performed clearing a part of the land within the boundaries…authorized to possess “a certain quantity” of land for 99 years, no acreage given.

Tom (elll in script, all loops, may be more of a scribble) Roberts

Bethey or Athey (X) Blunt (doesn’t say his or her mark, no caps)

Registered at the November 1777 court proven under the oath of subscribing witnesses Michael King Jr and William King Jr.

By the oaths of Michael King and William King, two subscribing witnesses, ordered to be registered, Nov Court 1777.

Based on the information in the Indian petition, and the dates, this would be the second, fraudulent lease.

Whitmell Tufdick, William Roberts, William Cain(e), William Blount, Thomas Smith, Lewis Tufdick, West Tufdick, chieftains of the Nation of Tuscarora Indians living on Roanoke River to Titus Edwards in consideration for the labor he will have to expend to clear the 60 acres of land, to inhabit the land for 99 years.

Benjamin (x) Smith (not listed above)

Samuel (x) Bridgers (not listed above)

Wineoak (+) Charles (not listed above)

William (x) Baskett (not listed above)

What (x) Gibson (not listed above)

John (x) Cain (not listed above)

There is a note on page 320, Nov 1777 court, that the foregoing deed was not registered “in course being wanted.”

Registered November 1777 by the oath of Zedekiah Stone, a subscribing witness.