John Two Guns White Calf (1872-1934), shown above, may indeed be memorialized in a way few other Native Americans have been – on a piece of American money – the buffalo nickel to be specific.  But then again….maybe not….there is a very interesting mystery.  So sit down and pull up a mug of something to drink….

Two Guns White Calf was born near Fort Benton, Montana, son of White Calf who was known as the last chief of the Pikuni Blackfoot.

Two Guns White Calf, also known as John Two Guns and John Whitecalf Two Guns, was also, in time, a Blackfoot chief.  He provides one of the most readily recognizable images of a Native American in the world as impression of his portrait appears to appear on a coin, the Indian head nickel.

His visage was reportedly used along with those of John Big Tree (Seneca) and Iron Tail (Sioux) in James Earl Fraser’s composite design for the nickel.  Notice the chief’s signature in the photo below taken by T.J. Hileman. 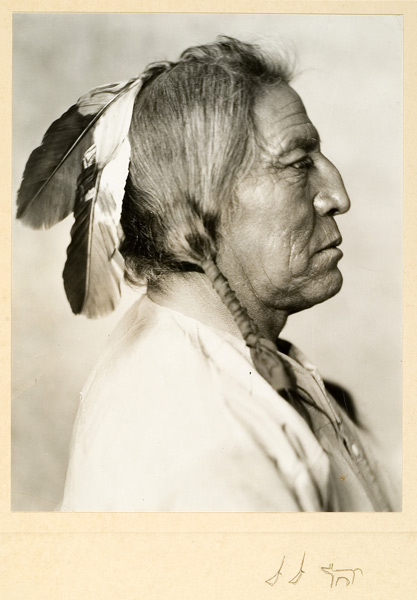 After the coin’s release around the turn of the century, Two Guns White Calf became a fixture at Glacier National Park, where he posed with tourists. He also acted as a publicity spokesman for the Northern Pacific Railroad*, whose public relations staff came up with the name “Two Guns White Calf.”  He died of pneumonia at the age of 63 and was buried at Browning, Montana in a Catholic cemetery.

“John Two Guns was born in 1871 and adopted at an early age by White Calf, a prominent warrior chief who was responsible for many of the Blackfoot Tribe’s treaties. After the death of White Calf in 1902, Two Guns became a tribal leader. When Two Guns first saw the buffalo/indian-head nickel (released in 1913) he was convinced that it was his own likeness on the coin. However, the sculptor, James Earle Fraser, always insisted that the head was a composite of several models. He specifically named Two Moons (a Cheyenne) and Iron Tail (a Lakota Sioux) and “one or two others” (in his later years, he mostly said, “one other”).

The Great Northern Railroad, always interested in promoting tourism to its Glacier Park Hotels and passenger traffic on its trains, sought to encourage the idea that Two Guns was the model. The argument raged from 1913 to the death of both figures in 1934 and continues to resurface even now.

The question would seem to have been put to rest by a letter from Fraser to the Commissioner of Indian Affairs in 1931, in which he denied ever having seen Two Guns.

But Charles Bevard, an auctioneer who had come into possession of a number of Two Guns’ personal effects which led him into extensive historical research on the subject, suspected that the US Government wanted Fraser to “discredit” Two Guns as a coin model because they were afraid of the great influence he had on the tribes.

The Chief headed a secret organization known as the Mad Dog Society which was attempting to preserve Blackfoot Heritage. Traditional Indian dances such as the Sun Dance and the Ghost Dance, which had been banned, were again being performed after American Indians received blanket citizenship in 1924. Bevard believed that the US Government feared that Chief Two Guns, like his father, might again take the fierce Blackfoot warriors on the warpath in an attempt to regain their land.

Others pointed out that if Fraser had never been able to remember the third model, how could he be certain that it wasn’t Two Guns Whitecalf? “If he wasn’t a model for the Buffalo nickel, he was [still] the most famous Indian in the 20th century,” Bevard said, “….He had a relationship with non-indians, anyone from presidents on down, and he did a lot of great things for Indians and he was quite the statesman, and, if nothing else, he should be remembered for that.”

Although he is widely remembered for his appearance on the buffalo head nickel, he was an emissary for his people as their Chief, in particular regarding the government’s unmet treaty agreements.

Chief White Calf (son of the first Chief White Calf) also went to Washington DC to collect monies owed to the Indians.  Here’s what he had to say about the government’s delinquent payments:

“In the old days, when we made war on the other tribes, and conquered the land you [whites] later took away from us, our warriors carried a bow and two quivers full of arrows. In the old days my quivers held arrows, because in those times we fought with arrows. But nowadays one can no longer fight with arrows; nowadays one must fight with money, and you can clearly see that the quivers which should hold the money with which to fight for my people are empty.”

The Chief pulled his pants pockets inside out to show they were empty.

Chief White Calf went to Washington D.C. and met with the Commissioner of Indian Affairs to get the money due the Blackfeet people, but the commissioner John Collier told him to go home and the check would be sent in due time. The Chief refused and told Collier he was “going to stay until he got the claim money due his people even if he had to die like his father Chief White Calf died in 1903 in the Presidents private chamber, fighting for tribal claims.”

Chief White Calf, the son, told Collier he would “take an old blanket and sleep in the streets and eat garbage” if he had to, but he would not leave without that money.

Commissioner Collier relented the next day and called the Chief to his office and handed him the check due the Blackfeet Indians.

*Another historian has indicated that the railway was the Great Northern Railway, but I cannot verify if only one or both were involved.

Update: Marilynn, the owner of this painting of Two Guns, originally owned by her father who lived in Lethbridge, Alberta, Canada and loaned to the Galt Museum for years has provided permission to include it in this article. This painting is believed to have been originally owned by Harold and Marie long, of Lethbridge, located in the Porcuppine Hills about 30 miles west of Fort Macleod, the same road as Head Smashed in Buffalo Jump.