Will the Real Meherrin, Please Stand Up

The Colonial Records of North Carolina contains several gems, one of which is a mystery that involves the Meherrin Indians.

In the “Colonial Records of North Carolina, Second Series – Volume VII – Records of the Executive Council – 1674-1734″ (Editor Robert Cain, Department of Cultural Resources Division of Archives and History, Raleigh, North Carolina 1984) on pages 167-169, we find a petition from the Meherrin asking to have land surveyed for a reservation.  This petition is followed by a second claiming that the Meherrin aren’t who they claim to be.  The language has been slightly modernized with punctuation.  My commentary is in italics below.  You can see the transcription of the document here:  http://docsouth.unc.edu/csr/index.html/document/csr02-0294

This day was read at the Board the petition of the Maherrin (sic) Indians shewing that they have lived and peaceably enjoyed the said Towne where they now live for such a space of time as they humbly conceive entitles them to an equitable right in the same.  That they have not only lived there for many years but long before there were any English settlements near that place or any notion of disputes known to them concerning the dividing bounds between this Countrey and Virginia and have there made large improvements after their manner for the better support and maintenance of themselves and families by their lawfull and peaceable industry.

The above reference to the disputes regarding the dividing bounds is referring to the disputed border between Virginia and North Carolina.  The border was for a long time unsurveyed, and when surveyed in 1709/1710, between flawed equipment and disagreement between representatives of both colonies, agreement could not be reached.  The disputed band was 15 miles wide, north to south, and both colonies forbid settlement in this area.  Regardless, people did settle in the disputed region, paying taxes to neither colony.  This area became known for rogues and outlaws.  During the initial survey, Virginia accused the North Carolina surveyors or not wanting the survey to be completed because they were trading with the illegal settlers in this “no man’s land” region.  This disagreement lasted more than 40 years in total and made for a very colorful period in history.  More can be read at this link:  http://www.carolana.com/Carolina/Noteworthy_Events/NC_VA_border_surveys.html  and http://www.virginiaplaces.org/boundaries/ncboundary.html

On the map below, you can see the disputed band labeled Carolina Charter 1663. 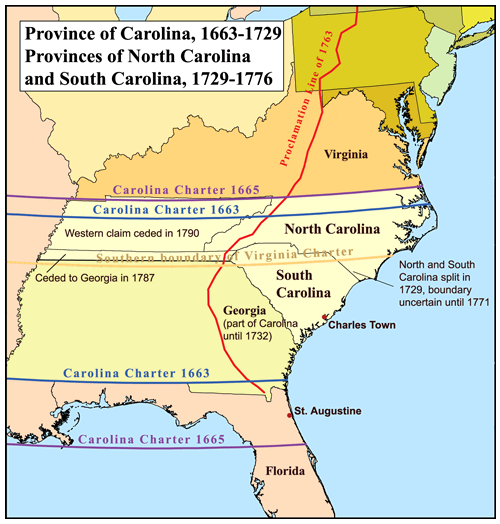 Notwithstanding which Collonel William Maule and Mr. William Gray have lately intruded upon them and have Surveyed their said Towne and cleared grounds on pretence that it lys in this Government and that the said Indians have allways held it as Tributaries to Virginia which is not so praying this Board to take them into their protection as their faithfull and Loyall Tributaries and to secure to them a right and property in the said Towne with such a convenient quantity of land adjoyning to it to be laid off, by meets and Bounds as to them shall seem meet.

Tributary Indians were tribes that entered into an agreement with Virginia, in particular, or another state in the same manner.  The Indians agreed that they were subjects of the King and the representatives of the government agreed to certain things as well, typically reservation land, food, supplies and protection.  The Indians also agreed to fight with and defend the colonists and settlements, and the settlers agreed to protect the Indians from other tribes, typically the Seneca or other Iroquoian tribes that raided from the North.  Sometimes there was either a real or ceremonial amount of tribute to be paid by the Indians to the Governor in skins, or a representative chestnut, on the Feast of St. Michael the Archangel, or Michaelmas, on today’s calendar as Sept. 29th.  Here is a list of Virginia’s tributary in Indians in 1670.  http://www.baylink.org/treaty/indians.html

Then allso was read the petition of sundry inhabitants living near the said Indians shewing that sundry familys of the Indians called the Maherrin Indians have lately encracht [encroached] and settled on their land which they begg leave to represent with the true account of those Indians who are not original inhabitants of any lands within this government but were formerly called Susquahannahs and lived between Mary Land [Maryland] and Pensilvania and comitting several barbarous massacrees and outrages there killing as ’tis reported all the English there Settled excepting two families they then drew off and fled up to the head of Potomack and there built them a fort being pursued by Mary Land and Virginia Forces under the Comand of one Major Trueman who beseiged the fort eight months but at last in the night broke out thro the main guard and drew off round the heads of several Rivers and passing them high up came in to this Country and setled at old Sapponie Towne upon Maherrin River near where Arthur Cavenah now lives but being disturbed by the Sapponie Indians they drew downe to Tarraro Creek on the same River where Mr. Arthur Allens quarters is.  Afterwards they were drove thence by the Jennet Indians down to Bennets Creek and settled on a Neck of Land afterwards called Maherrin Neck because these Indyans came downe Maherron River and after that they began to take the name of Maherrin Indians, but being known the English on that side would not suffer them to live there, then they removed over Chowan River and settled at Mount Pleasant where Capt. Downing now lives but being very troublesome there one Lewis Williams drove them higher up and got an order from the government that they should never come on the So. side of Wickkacones Creek and they settled at Catherines Creek a place since called Little Towne but they being still mischievous by order of the government Collonel Pollock brought in the Chief of them  before the Governor and Council and they were then ordered by the Government never to appear on the South side of Maherrin, They then pitcht at the mouth of Maherrin River on the North side since called old Maherrin Towne where they afterwards remained tho they were never recieved or became tributaries to this Government nor ever assisted the English in their warrs against the Indians but were on the contrary very much suspected to have assisted the Tuskarooroes [Tuscaroras] at the Massacree.

This reference is to the Tuscarora War which took place between 1711 and 1733, sparked by the continued encroachment of the settlers on Indian land.  The event which began the war was the murder of John Lawson in 1711.  Baron De Graffenreid escaped with his life from the same event, a trial held by the Indians, although ironically it was DeGreffenreid that was involved with the sale of the Tuscarora Village, right out from under the Tuscarora, without their consent.  In any event, this episode set of a tenderbox which resulted in the Tuscarora War in which many people on both sides were killed.  Virginia attempted to stay neutral which South Carolina sent troops, white and Indian, to assist the colonists.  Many Tuscarora who were not killed were enslaved.  More can be read here:  http://en.wikipedia.org/wiki/Tuscarora_War

The Baron De Graffen Reed offering his Oath that one Nick Major in Particular being one of the present Maherrin Indians satt with the Tuscarooroes at his tryall and was among them when Mr. Lawson the Surveyor Genl. was killed by them so that these Maherrins were not originally of this Country but enemies to the English every where behaving themselves turbulently and never lookt on as true men or friends to the English nor ever paid due acknowledgement to this Government. Some years agoe Col. Maule the then Surveyor Genl. obtained an order to Survey the Lands at old Maherrin Towne which was accordingly done and pattented afterwards since that they have paid Tribute to this Government and have been allowed by the Government to remain on those lands. But since that a great sickness coming among them swept off  the most of them, and those that remained moved off those lands at Maherrin Towne and sundry at them have lately seated their timber and stocks and hindring them from improving their lands they being unwilling themselves forcibly to remove the said Indians least some disorders might arise thereon praying an order to the Provost Marshall That if the said Indians do not remove off in some convenient time they may be compelled thereto etc.

This paragraph provides us with some very interesting information.  The Tuscarora were an Iroquoian tribe, so finding a Susquehanna among the Tuscarora “visiting” is not a surprise.  These tribes maintained relationships over great distances and hundreds of years, acknowledging their “counsinship.”  The more interesting part is the statement that the Meherrin removed from their town after the sickness.  This sickness is testified to as if there is current knowledge, so it would be after the Meherrin land was patented. I was unable to find a land patent to the Meherrin prior to this 1726 date, although there may be one buried in the Virginia records.  However, this leaves us with the question of where the remaining Meherrin went after they left their town.  It sounds like the Indians just moved onto adjacent land that the English either felt were theirs or had patents for.

Whereupon by the consent of both Parties It is ordered in Council that the Surveyor Genl. or his Deputy do lay out unto the said Indians a certain parcell of land lying between Maherrin River and BlackWater River runing three miles up Blackwater River and then a streight line to such a part of Maherrin River as shall be two miles from the mouth thereof and if the same line shall leave out the settlement of Capt. Roger a Meherrin Indian that then the Surveyor do lay out a tract of 150 acres the most convenient to his dwelling. Which lands when surveyed, the Surveyor is to make return thereof into the Secretarys Office that grants may pass for the same to the said Indians.

While this language is not unusual in terms of Indian land, it is unique in that the idea that someone gives up the right and title to their land by moving off of it is foreign to the English (and by inheritance, the American) system of property rights.  We don’t find this language in any other documents pertaining to Europeans, only dealing with Indian land grants for tribes. It appears that the European settlers, knowing that the Indians tended to be migratory, appeased the Indians currently before them by allocating land for their usage, but knew that eventually, the Indians would move, probably never realizing that by doing so, they would forever lose the right to that land.  The concept of land ownership in general was very foreign to the Indians, and once they began to understand the English concept of land ownership, the convoluted concept of “ownership until vacating” was even more confusing to them, resulting in the eventual loss of almost all tribally owned lands, which was, of course, the original intention.