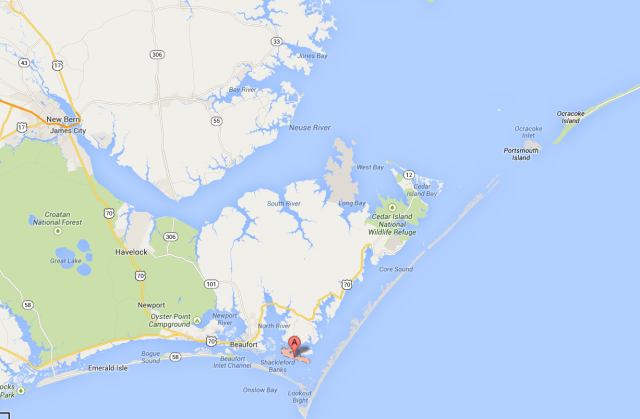 In 1714, two land grants were awarded that very specifically mention the Core (Coree) Indian Town.  I initially thought both of these were referring to the same location, but after looking at a map, I realized there must have been two separate towns.

The first grant refers to Crany Island, which is present day Harker’s Island, shown in pink with a red balloon above.  This means that the Core Indian Town referenced in this grant was at the tip of the mainland.

The second grant refers to the south side of the Neuse River, which is located closer to the top of the map and not on this peninsula.

1398 – pg 354 Thomas Pollock March 19 1714/15 2400 acres all that island called Crany Island joining a narrow passage of water that parts from ye main land near Core Town and part of the sound that divides it from ye Island of Sand Banks that runs from Cape Lookout to Topsail Inlet.