On March 23, 1847, the Indians of the Choctaw nation took up a collection.  Moved by news of starvation in Ireland, a group of Choctaws gathered in Scullyville, Okla., to raise a relief fund. Despite their meager resources, they collected $170 and forwarded it to a U.S. famine relief organization.

The Choctaw Indians may have seen echoes of their own fate in that of the Irish.  Just 16 years before, in 1831, the Choctaw Indians were forcibly removed from their ancestral lands in Mississippi to what is now known as Oklahoma on a forced march known as the Trail of Tears.  Starving, freezing, many died.

Now the Irish were suffering a similar fate.  In the fall of 1845, the potato blight in Ireland began.  By 1847, there was massive death and famine.  The Irish were only permitted potatoes by the English authorities, and when the potatoes perished, so did they.  As many as a quarter of the Irish population either starved or immigrated under the worst of circumstances.  Many of those who left Ireland never arrived at their destination.  Ships were known as “coffin ships.”

British colonial policies before and during the crisis exacerbated the effects of the potato blight, leading to mass death by starvation and disease. For example, in March of 1847, at the time of the Choctaw donation, 734,000 starving Irish people were forced to labor in public works projects in order to  receive food. Little wonder that survivors referred to the year as “Black ’47.”  What potatoes were harvested were shipped, by the English, outside of Ireland.  There is certainly some question about whether these acts were intentionally genocidal, the same questions that apply to the US policy driving the Removal Act which led to the Trail of Tears.

The Choctaw people reached deep into their own pockets and cumulatively came up with $170 to contribute to the plight of the Irish, who, by the way, never forgot their generosity.  It’s ironic that President Andrew Jackson (whose parents emigrated from Antrim) seized the fertile lands of the five civilized tribes (Chickasaw, Cherokee, Creek, Seminole, and Cherokee) and forced them to undertake that harrowing 500-mile trek to Oklahoma. Of the 21,000 Choctaws who started the journey, more than half perished from exposure, malnutrition, and disease. This despite the fact that during the War of 1812 the Choctaws had been allies of then General Jackson in his campaign against the British in New Orleans.

Perhaps their sympathy stemmed from their recognition of the similarities between the experiences of the Irish and Choctaw. Certainly contemporary Choctaw see it that way. They note that both groups were victims of conquest that led to loss of property, forced migration and exile, mass starvation, and cultural suppression (most notably language).

The photo above shows a memorial to the victims of the Doolough Tragedy  which took place on March 30, 1849. To receive relief, hundreds of starving Irish were instructed to travel many miles in bad weather.  Many died on the journey.

Increased attention to the Great Famine in recent years has led to renewed recognition of the Choctaw donation. In 1990, a delegation of Choctaw officials was invited to participate in an annual walk in County Mayo commemorating a tragic starvation march that occurred during the Famine. In honor of the special guests, the organizers (Action From Ireland, or AFRI) named the march The Trail of Tears. Two years later, two dozen people from Ireland came to the U.S. and retraced the 500-mile Trail of Tears from Oklahoma to Mississippi. That same year the Choctaw tribe made Ireland’s president, Mary Robinson, an honorary chief. 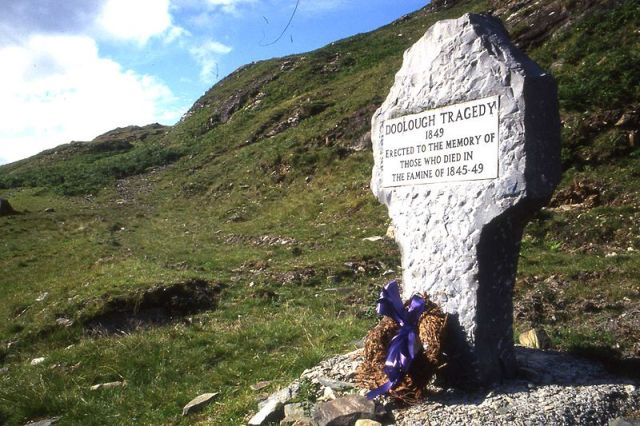 The photo at the beginning of this article depicts the Famine Memorial in Dublin today near the docks.  These pathetically thin people are portrayed walking towards the ships on the quay, their desperate escape to anyplace.  The story of the man on the right, carrying the child, is that by the time he arrived where there was soup, he discovered that he was carrying a dead child.

I’m always amazed at the degree of cruelty humans can carry out upon other humans.

An annual Great Famine walk was inaugurated in 1988 and has been led by such notable personalities as Archbishop Desmond Tutu of South Africa and the Choctaw Nation of Oklahoma. The walk, organized by AFrI (Action From Ireland), takes place on the first or second Saturday of May and links the memory of the Great Hunger with a contemporary Human Rights issue.