Baylus Brooks, in his search for historical information having to do with the Lost Colonists happened across a letter to Inglis Fletcher.  This letter was donated to ECU as part of the Inglis Fletcher Papers upon her death by her family and is now in the ECU Special Collections which can be seen at the link below. http://digital.lib.ecu.edu/special/ead/view.aspx?id=0021&q=inglis+fletcher

Jennifer Sheppard was kind enough to transcribe the typewritten letter so that we can share it with you here today.

How did Inglis Fletcher get involved with the search for the Lost Colonists?  The North Carolina Writer’s website provides us with this from her biographical information:

“The great-granddaughter of a man from North Carolina’s Tyrell County, Inglis Fletcher was born in Alton, Illinois. She spent the first half of her adult life with her mining engineer husband in northern California, Washington State and Alaska, once moving twenty-one times in five years. She had already published two successful novels by 1934, when a search for information about her Tyrell County ancestors piqued her interest in North Carolina’s early years. She spent the next six years researching, writing, and editing Raleigh’s Eden, an historical novel about Albemarle plantation families from 1765 to 1782. Between its publication in 1942 and 1964, she produced an additional eleven novels which eventually became known as the Carolina Series, covering two hundred years of North Carolina history from 1585 to 1789. Her established working pattern was to spend one year researching and one year writing each volume.

Inglis Fletcher was a firm believer in extensive research for her novels, so committed to accuracy that she would not begin to outline her plots until she was steeped in details of everything from historical events to what people ate and wore. Her favorite characters and their descendants reappeared from book to book, taking part in intricate plots, wild adventures and love stories that blended with actual past events and personages. When Raleigh’s Eden was criticized by native Tar Heels for historical “errors,” she publicly countered all accusations with documented quotations.”

Inglis Fletcher wrote the book “Roanoke Hundred” in 1948.  You can see more about her and a list of her books which are still available today at this link:  http://www.ncwriters.org/services/lhof/inductees/ifletche.htm

Her research into the Lost Colony attracted the attention of Florence Rohr, a teacher who had worked with the Drs. Pierce at Breneau and who had been lecturing about the Dare Stones.  Aside from the Drs. Pierce themselves, and of course, Bill Eberhardt, she may have been the closest to the stones, their study and the unfolding saga of events.  Here is her letter to Inglis Fletcher.

I came very near writing, “My dear Inglis Fletcher”. It does seem almost instinctive to omit the “Mr.” or “Mrs.” when the addressee has reached the rank of the immortals.  Your place among them seems pretty well assured now with  “Roanoke Hundred”.  What a wonderful book that is!  I enjoyed every word of it. And all the time I felt its kinship to my favorite novels of Sir Walter Scott. And sometimes I thought of “Gone With the Wind”. In your handling of infinite detail it reminded me of “Anthony Adverse”.  It is truly a great book, and I am so proud that a woman has written it.

My purpose in writing you is twofold: first, to express my appreciation for your magnificent contribution to American literature; second to talk to yoy (sic) about a matter that is very much on my mind, and one which is likewise in the field of your greatest interest, that is, Raleigh’s “Lost Roanoke Colony”.

Have you any theory as to why it is that those who should be most eagerly interested are usually among the first to denounce as fake and fraud any evidence that may be discovered unexpectedly, purporting to throw light on puzzling questions of history?  You know this story of the Drake Plate (of 1586)   How the men who discovered it were ridiculed, and proclaimed suckers, or deliberate fakers, by the intellectual who should have been most interested.  You remember it was a simple layman, who asked a simple question, and thereby produced indisputable proof that the plate was genuine.  Then, we have the case of the Kensington Stone.  Lest you may not have seen this article in the November 1948 issue of Readers’ Digest, I am enclosing it with this (the word artie appears here but is struck through) letter.  Here there was the same mockery. The same derision for the man who discovered it and believed in it.  Among these who were quick to ridicoule (sic) were officers of the Smithsonian Institute.  They seem lately to have undergone a change of heart, for now, it seems, they “have placed the stone among its greatest treasures”.  They have also received back the Lindberg plane, which twenty-five, no, nearer thirty, years ago they exiled to England.

Is this quick act of repudiation promped (sic) by a desire to to (sic) protect their own positions of impeccable authority, so that, just in case the discovery may prove to be a fraud, these authorities may be among the first to say, “I told you so”?

Nearly two years ago I came to your home, Bandon, with a group of teachers from the St Helena Extension of William and Mary College in Norfolk.  You received us most graciously, and autographed your books that we had brought with us.  At that time I told you that in response to many requests that came to Brenau College, I had been lecturing on “The Dare Stones” in Florida, Georgia, and Alabama, and even in Vermont, so great was the interest expressed.  I made no effort to prove that the stones were authentic, but I presented all the reasons that seemed good to me for believing that they might  be genuine.  I also presented reasons that might indicate that they were not genuine.

It had happened that I was visiting at Brenau when the first of these stones was brought to Dr. Haywood J. Pierce, President of Brenau, and later I knew every detail of the discovery, knew all about the subsequent search that he instituted, and saw every one of the thirty-three stones that were finally collected.

In the last summer that Dr. Pearce was alive, he invited archaeologists, and historians from all over the United States to come to Brenau as guests of the college to study with these stones which are still in the Brenau College Museum.  Thirty-seven men came from colleges and universities widely scattered. They remained three or four days, and studied the stones carefully.  Before they left they drew up a document, asking the privilege of going on record as believing in the authenticity of these stones, at least most of them.  Thirty of the thirty-seven men signed it.  Rather brave of them, wasn’t it?

As I traveled from place to place, I discovered a peculiar animosity in some quarters.  I tried to explain that D. Pearce was not trying to prove that the stones were genuine, but rather to leave nothing undone to find out whether they might be genuine.  He was a man of rare intellectual integrity, and I am absolutely sure that he had no ulterior nor (sic) selfish motive in pursuing this study. So I was shocked when I discovered on visiting the pageant on Roanoke Island, that someone among the actors and actresses there had written a comedy entitled, “Dr. Pearce and His Rocks”, and had put it on for their amusement.  Nothing in story of the Dare Stones could possibly have detracted from interest in the Roanoke pageant, rather should have added to that interest for the play as presented on Roanoke Island ends just where the story of the Dare Stones begins.

Sometime later in the summer, not many months before Dr. Pearce died, a newspaper reporter a Jewish gentleman I think he was, (I forget his name) came to Brenau, saying that he had been sent by the Saturday Evening Post.  He was received as a guest at Brenau, and entertained there for a week.  Dr. Pearce was too ill to do very much for the reporter, but he had his son, Dr. Haywood Pearce Jr., place himself at this man’s disposal.  Young Haywood showed him all of the stones, told him all that he knew about them, and drove him all over the adjacent country to the three spots where the stones were supposed to have been found.

The reporter then offered Haywood $350 to write the story for the Post.  This offer Haywood accepted and delivered the story before the reporter left.  In a few months this story appeared in the Post, and continuous (sic) with it, almost as if it were a part of Haywood’s story, this reporter wrote the crudest, rudest article I have ever read.  He referred to Dr. Pearce, who was a gentleman of rare dignity and scholarship, as “old man Pearce” and to his wife, who had extended hospitality as far as possible when her husband was ill, as “old lady Pearce”.  The reporter seemed to feel that he had refuted every possible claim that anyone might make supporting the authenticity of these stones.  To me his arguments seemed worse than superficial, there was a tone of malice, which suggested to me that he might have been paid to go to Brenau for the express purpose of smashing the whole story.  But, I asked myself, whose interests could possibly be served by such an attack.  When this story came out Dr. Pearce was too far gone to attempt any reply, and Haywood Jr. who is I believe, now teaching at Harvard, was I think, too disgusted to express further interest in the whole affair.

And then, because this story is in the field of your greatest interest, I should be glad to come to Edenton, to Bandon, if that should be desirable, show you all the pictures and information that I have, and tell you all that I know about this whole matter.  There are very few persons who know much more about it than I do.  I feel that I should like to do this for the sake of Dr. Pearce, for whom I worked, as teacher at Brenau, for six years, and whom I greatly admired and respected.  Dr. Pearce had the PH.D. and other degrees from German and French Universities, and Phi Beta Kappa from Harvard.  In his ideas of Education he was years ahead of his time.  It will interest you to know that he was the first college president in America to give credit on literary degree for work done in misic (sic) and the drama.  How he was persecuted by the National Educational Association!  Now every college and university in the U.S. gives this credit.

It seems to me that you have a mind preeminently suited to research work, and I am deeply interested to know what reaction you would feel to a study of the facts that I could bring to you.  There are many questions aroused in my own mind that I can not answer. 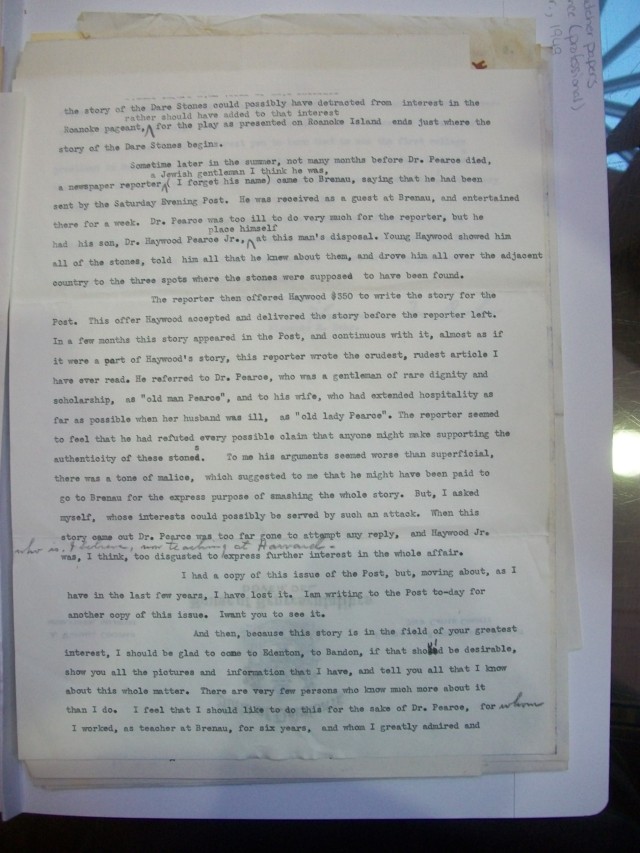