The War of 1812’s Forgotten Warriors

In the heat of the battles of the War of 1812, Native warriors were sometimes critically important.  They were all but forgotten later. 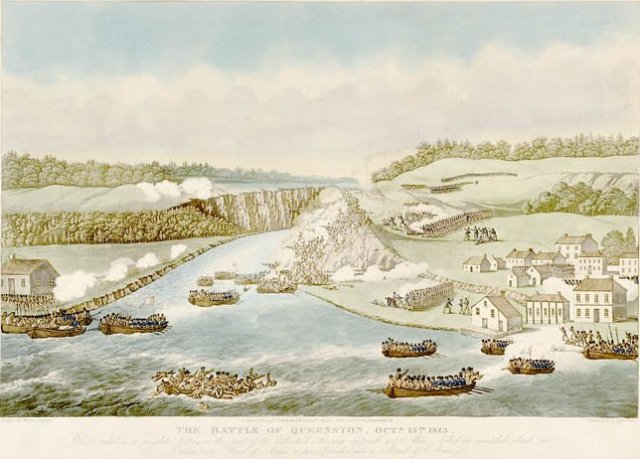 An article today in the Toronto Star provides the information below and some additional detail.

At the Battle of Queenston Heights, in particular, John Norton, John Brant and about 80 Six Nations warriors distinguished themselves by holding back the overwhelming American advance until reinforcements could arrive. Their invaluable efforts offer one of the many lesser-known tales of the war. The traditional historical narrative of the battle heavily privileged the courage of Brock and the swift leadership of his replacement Roger Sheaffe, rendering the story of the Six Nations, who battled a force more than 10 times their size for several hours, a footnote.

Using their knowledge of the forest and their superior marksmanship, the overmatched Six Nations warriors scaled the heights under cover, avoiding the treacherous rise where a charging Brock had fallen. While Brock had faced the invaders head on, exposing himself to sharpshooters, Norton led his troops around the battlefield to come upon the Americans from the southwest.

Taking the Americans by surprise, the warriors used the cover of gunsmoke to obscure their numbers and their war cries to strike fear in the hearts of the Americans, preventing them from advancing to take the town of Queenston. Hundreds more troops waited to cross the river from the American side, but the sounds of battle made them fear the Six Nations forces had overrun their compatriots. Fearing for their lives, the American reinforcements refused to cross the river, and the remaining troops were defeated when additional British support arrived.

Like many who served, John Brant was emboldened and embittered by his experiences and became a community leader after the conflict. The 18-year-old son of Mohawk leader Joseph Brant who fought for the British in the Revolutionary War, he would later fight for the Six Nations as a politician in the legislative assembly, the first aboriginal person to do so. John Norton, of mixed Cherokee and Scots origins, was adopted into the Six Nations community as a chief before the war and left a written diary known for its objectivity and detail. Other warriors at the battle would go on to community service as well. John Smoke Johnson became a Mohawk chief who was tasked with keeping and interpreting the community’s wampum belts.

1 Response to The War of 1812’s Forgotten Warriors