Cherokee Indian Guards at the Battle of Tazewell 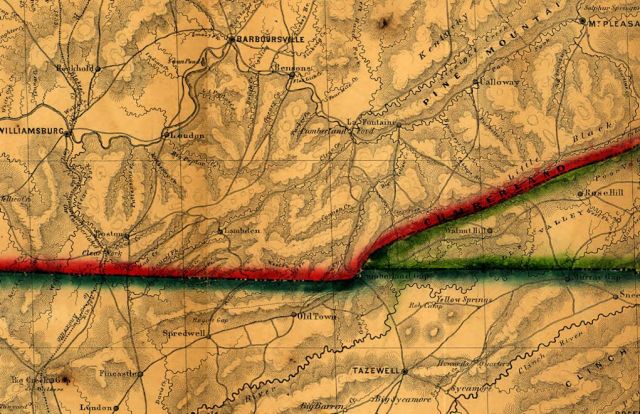 During the Civil War, the battle of Tazewell, TN, took place beginning on August 2nd, 1863.  It happened outside of Tazewell, TN at the current location of the intersection of US 25E and Lone Mountain Road where it becomes Little Sycamore Road at Springdale.  This location is about 15 miles south of Cumberland Gap.  On the map above from the Civil War, Tazewell is shown at the bottom right.  On the contemporary map below, the town of Cumberland Gap (A), Tazewell (B) and Springdale (C) are shown.

A soldier in Company E, the 16th Ohio, which was taken captive had some interesting observations of his 9 days spent as a hostage.  He recorded his experiences.  Unfortunately, they are anonymous, as he never signed his name.

One of his comments gives us some perspective on the Cherokees at that time and the stereotypical outlook about Indians.

“August 8th, a large number of rebel soldiers, under arrest for various offences, were brought up from Bear Station and placed in the “bull pen” with us. They were guarded by a company of Cherokee Indians that had been enlisted from the old reservation in North Carolina. Very few of these indians were full blooded; some of them had wavy hair and the full lip of the African. Among their numbers might have been found all the grades of complexion from the bronzed face of the common soldier to the deep copper tint of the aboriginal, but all wore the listless, lazy look of the true indian.”