When Kay Lynn Sheppard sent me the extracted Currituck court notes, I found four records that spoke directly to an Indian Town or Indian line.

Of course, I wanted to know where this Indian Town was located.  Kay Lynn was most helpful there as well, locating it on two old maps.  On the 1808 Price-Strothers map, you can see it listed as Indian Town. 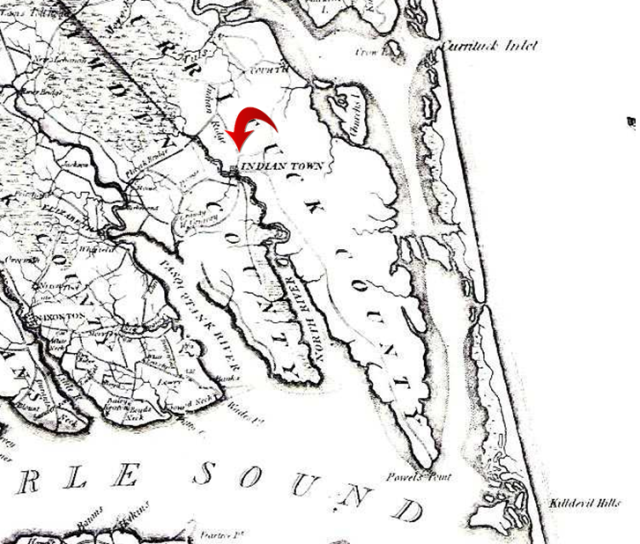 On the earlier, 1733 Mosley map, it’s actually called Yawpim, reflecting the name of the tribe whose village and reservation were located there.

It’s worth noting on this map that the Poteskite Indians are also shown not far from the Yawpim, as are the Mattamuskeet and the Hatteras on the south side of Albemarle Sound. 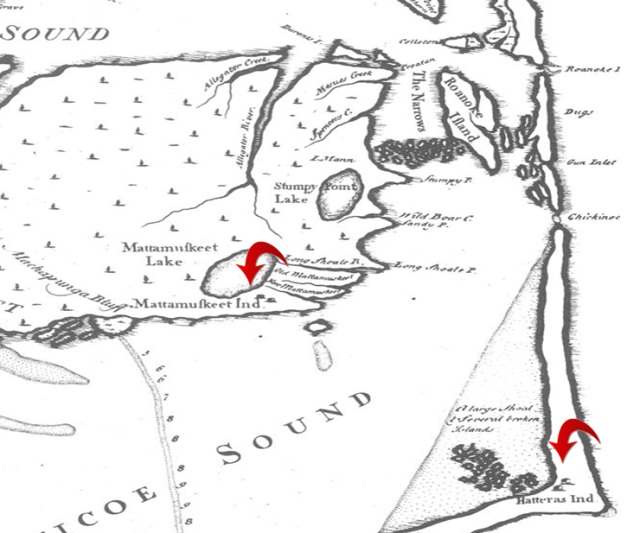 This land for the Yawpim Indians was set forth as a reservation in 1704.
ORDER TO LAY OUT THE RESERVATION FOR THE YAWPIM INDIANS
(Original in Court House at Edenton, N. C.)

Att a Councill held att the House of Captn John Heckleford in Little River Aprill ye 12th 1704. Prsent the Lords Deputyes.
Ordered that the Surveyr Generall or Deputy Shall (with what Expedition is possible) Upon Complaint of the Yawpim Indians Lay out for the sd Indians (where they now live) four miles Square of Land or the Quantity not injoining any of the old Settlements which was made before the Order of Councill bearing Date in October 1697, And Mr. John Hawkins, Mr. Thomas Taylor, Mr. Robert Morgan & Mr. John Relfe or any three of them are hereby required to attend the Surveyr or Deputy etc to be directed to Captn Tho: Relfe to Execute with speed and make returnes.”

This was followed on the next two pages by a very similar order for the Chowan Indians.

This “History of Indian Town” tells us a little more.

As with many other early towns created in North Carolina, there simply isn’t much information currently available regarding the village of Indian Town, first within Currituck County, then because of minor boundary changes it ended up in Camden County.

One can easily find its location on many maps that were produced in the 1790s and well into the late 1800s, but one cannot find much else out about this town. Indian Town was located well up the North River – about halfway up the border between Currituck and Camden County – a tad north of what is now the town of Camden (on the east side of Camden County), and a bit south of the town of Currituck (on the other side of the county from Indian Town).

US Postal records provide us a little insight. Indian Town was granted a Post Office on August 10, 1793 and its first Postmaster was Mr. Thomas P. Williams of Currituck County. On February 1, 1882, the Post Office records indicate that Indian Town was moved to Camden County, and its first Postmaster in that county was Mr. Samuel S. Leary. This PO was in continuous operations until May 15, 1934, when it was closed for good.