The Lost Colony in Clarksville, Virginia???

Well, you just never know where that elusive Lost Colony is going to turn up next.

While researching something else entirely, I stumbled across William T. Mitchell’s writings at this site:

Douglas L. Rights, The American Indian in North Carolina, John F. Blair, Winston-Salem, NC, 1957. Rights attempts to connect historical references to Piedmont tribes with specific archaeological sites, an attempt probably unsuccessful in comparison to Dr. Briceland’s study mentioned above. Rights’s book, however, does give a fascinating overview of the Piedmont tribes. Among his many fascinating conclusions is his assertion that the last survivors of the Lost Colony took up residence near Clarksville, Virginia. (John Smith’s May 1609 letter to the Virginia Company of London stated that four English were alive under the protection of Gepanocon at the location of copper mines at the town of Peccarecamicke. — On this topic, see also this author’s article “Roanoke Island’s Lost Colony: A Note.”) 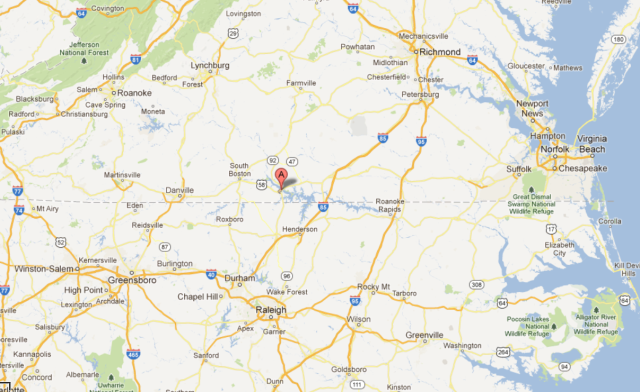 Where, exactly, is Clarksville, Virginia? It’s on the border of Halifax and Mecklenburg County, Virginia, just slightly north of the Virginia, North Carolina border, shown with the red balloon on the above map.

The following is found in “Captain Newport’s Discoveries in Virginia,” Transactions and Collections of the American Antiquarian Society, vol. 4, John Wilson & Son, Boston, Massachusetts, 1860, p. 61. The passage is referenced as being from William Strachey, History of Travaile into Virginia Brittania, published by the Hakluyt Society in 1849 from a manuscript in the British Museum.

As I mentioned in the text of my 1997 article “Rediscovering Pittsylvania’s ‘Missing’ Native Americans,” in years past I have talked to Halifax County (Virginia) residents whose families have a long tradition of descent from local Native Americans and the very first English settlers. In endnote 9 of that article, I mention that Douglas L. Rights, in his book The American Indian in North Carolina (John F. Blair, Winston-Salem, North Carolina, 1957), asserts that the last survivors of the Lost Colony took up residence near Clarksville, Virginia. The text below appears supportive of that conclusion; it is not clear whether it was one of Rights’ sources.

According to this account from William Strachey, the surviving Roanoke colonists would have escaped to places called Ritanoe, Ochanahoen, and Peccarecamek [near today’s Clarksville?], where they lived under the protection of, and worked in the copper mines of, the Weroance [chief] Eyanoco.

“At Peccarecamek and Ochanahoen, by the relation of Machumps,(1) the people have houses built with stone walls, and one story above another, so taught them by those English who escaped the slaughter at Roanoak, at what time this our Colony, under the conduct of Capt. Newport, landed within the Chesapeake Bay, where the people breed up tame turkeys about their houses, and take apes in the mountains; and where, at Ritanoe, the Weroance Eyanoco preserved seven of the English alive — four men, two boys, and one young maid (2) (who escaped, and fled up the river of Chanoke) — to beat his copper, of which he hath certain mines at the said Ritanoe; as also at Pamawauk are said to be store of salt-stones.(3)”

2. Was this Virginia Dare, the first-born Anglo-American? She or “— Harvie” are the only two on the list of that colony, as White left it, who could have been spoken of as “maids” in 1607. There were boys, but no other girls, among them.