Whereas yr Honrs. Petitionr. Having Receaved Dammages to ye Value of five pound by Tom King of the Woccon Ind:  Most Humbly Craves yr. Honrs. mature Consideration in Reference to my Losses, so hereby I may receave some Satisfaction As in Duty bound Shall pray”

There is no date on this item, but Robert Daniel was governor of North Carolina from 1703 to 1705. 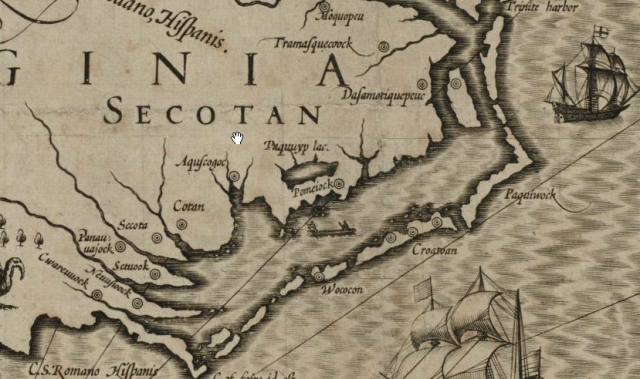 In 1756, the Hatteras Indians were involved with a court action regarding their land, where it became evident that while they had always lived there, they didn’t have a patent or land grant, and the Europeans were not recognizing their ownership.  They remedied that by requesting a land grant, which was given in 1759 and bordered King’s Creek.

While we never hear of Tom King again in the records, we do find his namesake creek, right in the middle of Indian town on Hatteras Island not long after, and on the land that would eventually be recognized as the Hatteras Indian village.

Tom King appears to be a Hatteras Indian identified by a European name.  King is not, however, a surname we find on Hatteras Island.  Did Tom King have descendants, and if so, what happened to them?