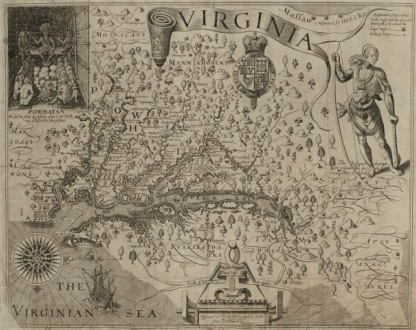 Our friend Yvette in the Dutch archives has done it again.  I’m so glad she loves maps as much as I do.  This map is particularly interesting though, because it is of the James River area, near Jamestown, discovery attributed to John Smith, the founder of Jamestown, drawn by William Hole.  This, of course, dates the map to about 1608 when Smith explored the Chesapeake Bay region.  He left Jamestown in October 1609, for England, due to a gunpowder accident.  In 1614, he was exploring the New England region, but did not further explore the Chesapeake, at least as far as I can find.  Smith died in 1631 in England.

This map was included in the 1624 book, The Generall Historie of Virginia, New-England, and the Summer Isles.

Here is a link to the entire map.  I love the Dutch archives and how they handle maps.  You can enlarge and scroll around to your heart’s content without losing resolution.

All of these sights are the mouth of the Chesapeake Bay.  This site provides a significant amount of information about this area, militarily, along with some nice maps.  http://www.virginiaplaces.org/chesbay/chesattack.html

This older map from the Library of Congress in 1861 shows the location of all three of these landmarks. 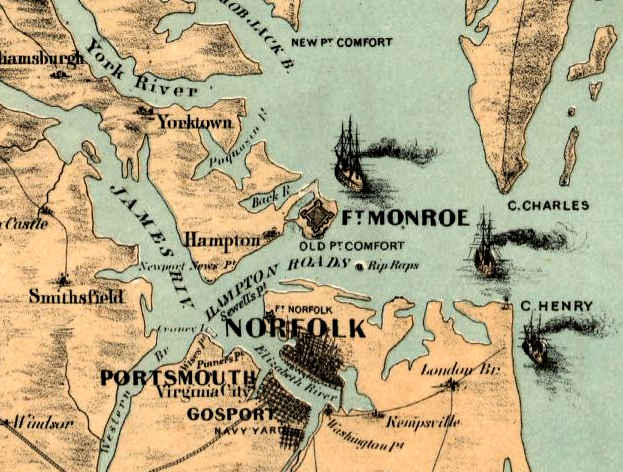 But look again at the older James River map. It also shows the location of Accohonock.

Jan. 2, 1608 – John Smith returns to Jamestown with information that there were “at a place called Acanahonan certain men clothed like me.”  On this map are two locations with similar names,  Accowmak or Accowmack and Accohanock.  Could one of these be Accohonock.

If you’re thinking to yourself that the spelling isn’t the same, you’re right.  Spelling was not yet standardized in the English language at that time.  And make note of something else on this map.

The word Sasquesahanougs is spelled three different ways, on the same map.

Below the drawing of the Native man, the legend says “the Sasquesahanougs are a gyant like people and thus attired.”  This is quite interesting. 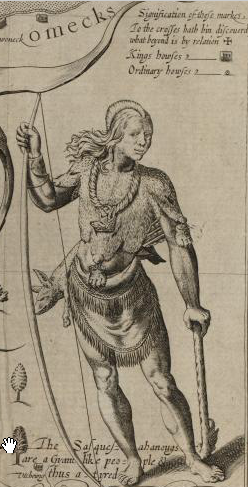 Does anyone know what animal the man has hanging from his back. It looks kind of like a pig.

In any event, further down the map, where the location of the Sasquesahanougs is shown, the name is spelled two ways: Sasqusahanough flu= and Sasques_hanough.  The underscore means that there is a letter I can’t read due to the crease.

We’ve learned a lot from this map.  First, we may have a location for Acanahonan where  one of the Lost Colonist sightings took place.  Secondly, we know where the villages are located, and the chief’s homes.  Third, we know that the Sasquesahanough’s were giant-like men.

Thanks so much Yvette.  You keep on looking for those colonists!!!  The Jamestown fort location was found on a Spanish map, so why not the colonists in the Dutch Archives????

15 Responses to Acanahonan Found on Jamestown Map in Dutch Archives?