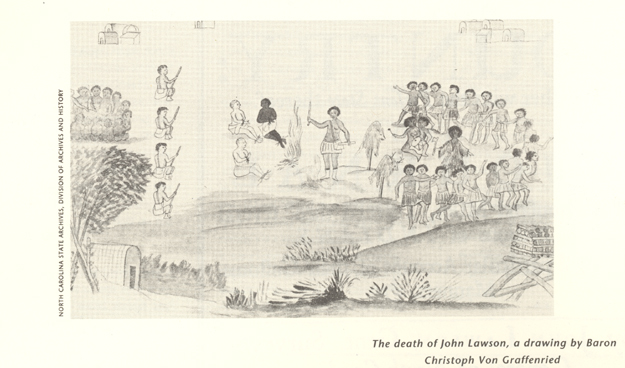 We’re not sure when John Lawson was born, because we know little about him before he arrived in the fledgling colony of Carolina in August of 1700.  He was obviously quite literate, judging from the fact that he wrote a book, which means he was educated, which means he was well placed in society.  John was not a poor immigrant.  He came to Carolina, arriving in Charleston, after being told in London that “Carolina was the best country.”

After his arrival he began immediately to explore and to record his findings.

Beginning December 28, 1700 Lawson led a small expedition out of Charleston and up the Santee River by canoe and then on foot to explore the Carolina backcountry. Along the way he took careful note of the vegetation, wildlife and, in particular, the many Indian tribes he encountered. He traveled nearly 600 miles through the wilderness, ending his journey near the mouth of the Pamlico River.

After his expedition, Lawson settled near the Pamlico River and earned a living as a private land surveyor. In 1705 he was appointed deputy surveyor for the Lords Proprietor of Carolina. In 1708 he succeeded Edward Moseley to become surveyor-general.

Lawson played a major role in the founding of two of North Carolina’s earliest permanent European settlements–Bath and New Bern. On March 8, 1705, Bath was the first town incorporated in what was to become North Carolina. Part of the incorporated land was owned by Lawson. He became one of the first town commissioners. Later he became clerk of the court and public register for Bath County.

Lawson published an account of his adventure in 1709, in which he described the native inhabitants and the natural environment of the region. The book was an instant success, and several editions were published, including versions in German and French. The resulting publicity attracted many settlers to the colony of North Carolina. In 1709 Lawson returned to London to oversee the publication of his book, A New Voyage to Carolina.

While in London he represented the colony in a boundary dispute with Virginia. He also organized a group of Germans, Electorate of the Palatinate, to settle in Carolina and returned with them in 1710 to found New Bern on the Neuse River. The government of Queen Anne had invited the refugees to England for passage to the colonies. They were fleeing extended hardship in their homeland, due to a record cold, and French invasions.

Lawson was involved with a land deal on behalf of the Germans with von Graffenreid wherein he sold the Tuscarora Indian village to von Graffenreid, either without the approval of the Indians, or without their understanding of what a “sale” meant.  In any case, the Tuscarora were not keen on the idea of moving away from their village and felt that Lawson had betrayed them.

In September 1711, Lawson and his associate Christopher von Graffenried were captured by Tuscarora Indians while ascending the Neuse River. The Tuscarora eventually released von Graffenried, but they tortured and killed Lawson.  They initially were going to release Lawson too, but he became argumentative and reprimanded the Indians for taking them captive in the first place.  The situation deteriorated and Lawson lost his life.

Shortly thereafter, tensions between Indians and settlers erupted into a bloody conflict known as the Tuscarora War.

Fortunately, for us today, Lawson’s book remains, as do several other original manuscripts having to do with this timeframe.  Von Graffenreid wrote about the incident and the founding of New Bern.  The drawing in the article is Von Graffenreid’s depiction of the death of John Lawson.  http://docsouth.unc.edu/nc/graffenried/graffenried.html

Lawson of course left us his New Voyage to Carolina in which he gives us one of the first in-depth descriptions of the Native people in the region.  http://docsouth.unc.edu/nc/lawson/menu.html

In addition, Colonel Barnwell, who played such a pivotal role in the Tuscarora war maintained a journal as well, although parts of it are missing.  http://www.ncpublications.com/colonial/Bookshelf/barnwell/journal.htm?

Today, John Lawson days are celebrated in Grifton, NC in October.  Their webpage holds an assortment of historical and cultural links, including a number about the Tuscarora and early settlements in that region up through and including the Tuscarora War.