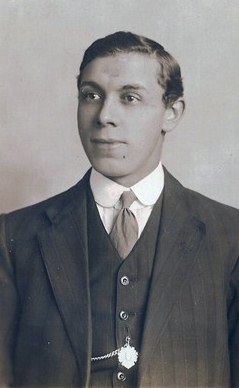 In the Carlisle Indian School records, I often find the same stuent name with a different tribe association.  Some are very close, like Mohawk and Saint Regis.  Those most likely are the same person because the St. Regis are a tribe of Mohawk Indians.  Some are quite different, from differing parts of the country, and those are either errors or two different people.  Some are simply questionable.  I decided to take one of those and see what I can find.

Trying to track females is difficult because of surname changes, so I selected a male with a unique name, Leander Gansworth, pictured above.  He is listed as both Tuscarora and Seneca.

There is an amazing amount of information available about Leander Gansworth, over 100 different records not including family trees.

He also applied for a passport.  That application, after he had moved to Davenport, Iowa as a printer, was to go to Canada for war related work and tells us that his father’s name was John and that Leander was born on Nov. 22, 1878 in Lewiston, NY.  From this application we also discover that his middle name was Newton.

There is absolutely no evidence that there were two Leander Gansworths during that timeframe, so the Carlisle records appear to be in error.  In every one of the Native census records, he is shown living on the Tonawanda Indian Reservation in New York which is a Seneca reservation.

The Seneca Nation is Iroquoian, as are the Tuscarora, and are in the Iroquoian Confederacy, but they are not the Tuscarora tribe who had their own reservation.

However, at Ancestry.com, someone has attached a “story” to his record that provides history of the Tuscarora tribe, so there may be some unknown facts at play here.  I did notice that there are some Gansworths who are Tuscarora.

Looking at other Ancestry records, his father and grandfather are shown as having been born on the Tuscarora Reservation and the last name morphing from Gansevoort to Gansworth.

So maybe the Carlisle records were right after all, and he was originally Tuscarora through his parents but was from the Seneca Reservation where he had spent most, if not all, of his childhood before enrolling at Carlisle.