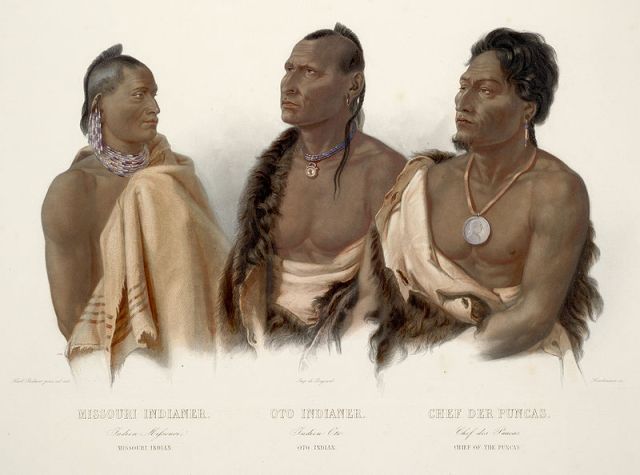 Once again, the Carlisle records provided the name of a tribe I hadn’t seen before, the Oto Indians.  The painting above by Karl Bodmer shows the Missouri, the Oto and the Chief of the Puncas (Ponca) circa 1840-1843.

The Otoe, or Oto, and Missouria, or Missouri, tribes both originated in the Great Lakes region of Siouian stock, part of a group commonly known at the Winnebago.  They are thought, along with the Ho-Chunk and Iowa tribes, to have once been a single tribe.

In the 16th century, the Iowa, Otoe, and Missouria broke away from that tribe and moved to the south and west. This group eventually split again, coalescing into at least three distinct tribes: the Ioway, the Missouria and the Otoe. The latter settled in the lower Nemaha River valley. They adopted the horse culture and semi-nomadic lifestyle of the Great Plains, making the American bison central to their diet and culture.

By the late 17th century, the Missouria had settled near the Missouri and Grand Rivers in Missouri.

Meanwhile the Otoes settled along what is now the Iowa-Minnesota border. They first came into contact with Europeans in late 17th century. Jacques Marquette, the French explorer, included them in a 1673 map, placing the Otoe near the Des Moines and upper Iowa Rivers. Pierre Le Moyne d’Iberville wrote in 1700 that the Otoe and the Iowa lived with the Omaha tribe, between the Mississippi and Missouri Rivers. After contact, they migrated to Nebraska and settled near the Platte River on what became the Otoe Reservation. 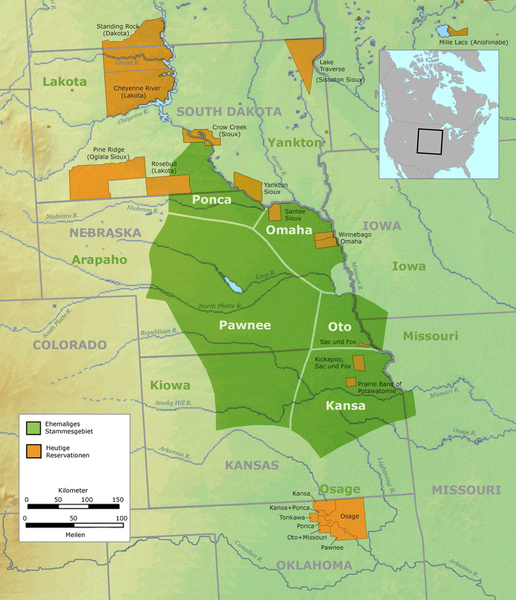 In the 19th century, the Missouria and the Otoe established permanent villages consisting primarily of earth lodges, but also occasionally tipis and bark lodges. Their joined society was patrilineal and comprised seven to ten clans. Tribal members had to marry outside of their clan. Each clan had a leader, and together the clan chiefs formed a tribal council. The chief of the Bear Clan was the principal leader of the tribes. They hunted buffalo and grew such crops as squash, beans, corn, and pumpkins. In 1803, Lewis and Clark estimated their population to be 500. George Catlin estimated their population at 1200 in 1833. In 1830 there were an estimated 1500 Otoe-Missouria living in together. By 1886, only 334 Otoe-Missouria survived.

Following the Louisiana Purchase by the United States, the Lewis and Clark Expedition headed up the Missouri River to explore the new territory. The Otoe were the first tribe they encountered. They met at a place on the west bank of the Missouri River that would become known as the Council Bluff.

Like other Great Plains tribes, the Otoe periodically left their villages to hunt for buffalo. Between 1817 and 1841, the Otoe lived around the mouth of the Platte River in present-day Nebraska. During this time, the remaining families of the Missouria rejoined them. They gathered with others to trade for European goods.

In the 1830s, the tribe was noted to have problems with alcohol, which was widely dispensed by traders. Some Otoe would trade vital supplies for alcohol, to the point of becoming destitute. As their dependence on alcohol grew, the men no longer hunted, but resorted to looting vacant Pawnee villages while the people were out hunting. This story of Indians suffering the ill effects of alcohol is all too familiar and was repeated over and over again in the history of many Native tribes.

In 1854 the Otoe-Missouria ceded most of their lands south of the Platte River in eastern Nebraska to the U.S. by treaty. They retained the Oto Reservation along the Big Blue River on the present Kansas-Nebraska border. They struggled to adapt to reservation life.

During the 1870s, the tribe split into two factions. The Coyote band favored an immediate move to Indian Territory, where they believed they could better perpetuate their traditional tribal life outside the influence of the whites. The Quaker band favored remaining on the Big Blue River land. They were willing to sell the western half of the reservation to whites to gain income for a tribal annuity.

Below, the Oto 1881 delegation in a photograph by John K. Hillers. 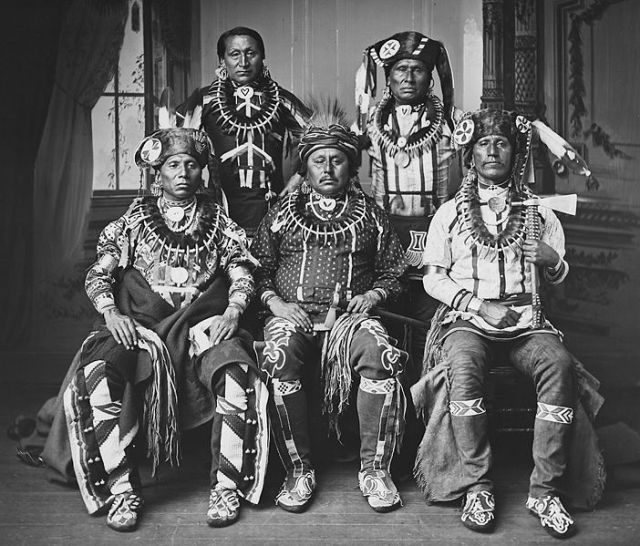 By the spring of 1880, about half the tribe had left the reservation and taken up residence with the Sac and Fox Nation in Indian Territory. By the next year, in response to dwindling prospects of self-sufficiency and continued pressure from white settlers, the remaining Otoe members in Nebraska sold the Big Blue reservation. They migrated to Oklahoma.

These Otoe men’s moccasins were made about 1880. 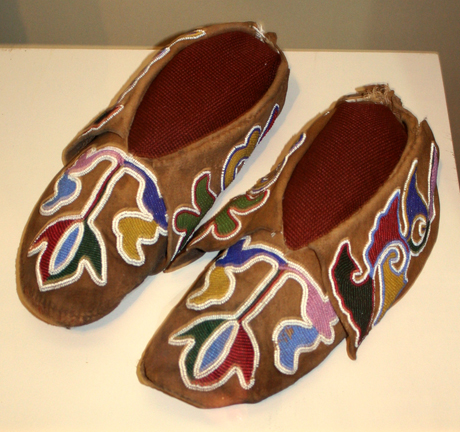 With the Otoe-Missouria already in Oklahoma, they purchased a new reservation in the Cherokee Outlet in the Indian Territory. This is in present-day Noble and Pawnee Counties, Oklahoma. Today the Otoe-Missouria Tribe of Indians is federally recognized. It is based in Red Rock, Oklahoma.

The Otoe or Oto language, Chiwere, is part of the Siouan family and closely related to that of the related Iowa and Missouri tribes.  Today, there are only 3 speakers of the Native language but the tribe has put a language revitalization program in place.