Red Coated Chiefs of the Shawnee

Fletcher Freeman has once again graced us with his research.  Thank you Fletcher!

In my research on the Shawnee Indians I have run across an interesting “Coincidence” spanning 75 years that I have not seen in the history of other tribes.  Three Chiefs adopted British red coats as their “formal” attire.  In fact in my examination of the old paintings of Indians by McKenney & Hall, George Catlin, and others, I have only seen one other Indian dressed in a Redcoat and this was a Mohawk Sachem named Hendrick whose portrait was published in 1755.

Thomas Hoyter was Chief of the Chowan Indians in North Carolina from approximately 1700-1740.  The Chowan were variously called Chawan, Chowanoke, Chowanoc, Chawanoke, Chuwon and Shownanocs.  Some Indian scholars believe that the Chowan were a branch of the Shawnee Nation due to the similarity in names, name root word, localities,  and pronouncing the “ch” as “sh.”  We are fortunate that an early North Carolina scholar, John Brickell, met and described Chief Thomas Hoyter (Highter) in his 1737 book “The Natural History of North Carolina.”

“Dinner being ended the Glass went round very merrily and whenever they drank to the Governour they always stiled him by the Name of Brother These three Kings speak English tolerably well and are very wary and cunning in their Discourses and you would be surprised to hear what subtile and witty Answers they made to each Question proposed to them notwithstanding they are in general Illiterate People having no Letters or Learning to improve them King Blunt being the most powerful of these I have mentioned had a Suit of English Broadcloth on and a pair of Women’s Stockings of a blue Colour with white Clocks a tolerable good Shirt Cravat Shoes Hat &c King Durant had on an old Blue Livery the Wastecoat having some remains of Silver Lace with all other Necessaries fit for wearing Apparel such as Shirt Stockings Shoes &c made after the English manner.  King Highter had on a Soldiers red Coat Wastecoat and Breeches with all other conveniences for wearing Apparel like the former And it is to be observed that after their return home to their Towns that they never wear these Cloaths till they make the next State Visit amongst the Christians.

Thomas Hoyter probably received his red coat following the Tuscarora War of 1711 as a reward for assisting the English Colonists in defeating the renegade Tuscarora.  King Blunt was leader of the friendly Tuscarora during this war.

Blue Jacket was a famous Shawnee War Chief who lived c1743-c1810 in what is now Ohio.  He fought the Americans following the Revolutionary War and was ultimately defeated at the “Battle of Fallen Timbers” by General “Mad Anthony Wayne” and subsequently ceded most of the Ohio Territory to the United States.  In 1792, a white captive by the name of O. M. Spencer was captured near Cincinnati and adopted into a Shawnee family.  He visited Chief Blue Jacket at his home on July 4, 1792 and wrote this description

“His person, about six feet high was finely proportioned, stout, and muscular; his eyes large, bright, and piercing; his forehead high and broad; his nose aquiline; his mouth rather wide, and his countenance open and intelligent, expressive of firmness and decision …. He was dressed in a scarlet frock coat, richly laced with gold and confined around his waist with a part-colored sash, and in red leggings and moccasins ornamented in the highest style of Indian fashion. On his shoulders he wore a pair of gold epaulets, and on his arms broad silver bracelets; while from his neck hung a massive silver gorget and a large medallion of His Majesty, George Ill. Around his lodge were hugh rifles, war clubs, bows and arrows, and other implements of war; while the skins of deer, bear, panther, and otter, the spoils of the chase, furnished pouches for tobacco, or mats for seats and beds. His wife was a remarkably fine looking woman; his daughters, much fairer than the generality of Indian women, were quite handsome; and his two sons, about eighteen and twenty years old, educated by the British, were very intelligent”

CHIEF BLUE JACKET as portrayed by Isabel Smucker based upon the description given by Oliver Spencer.  It is not an authentic or contemporaneous portrait and none are known to exist.

Tecumseh was a Shawnee Chief who was born in 1768 and was killed in 1813 by the Americans at the Battle of the Thames in Indiana where he sided with the British during the War of 1812.  He had been a warrior at the Battle of Fallen Timbers and must have known and seen Chief Blue Jacket in his “Red Coat.”  In 1808 a French Trader, Pierre Le Dru, painted a portrait of Techmseh in which he is depicted wearing a red military coat with gold epaulets.  Around his neck is a medallion with the likeness of  King George III. 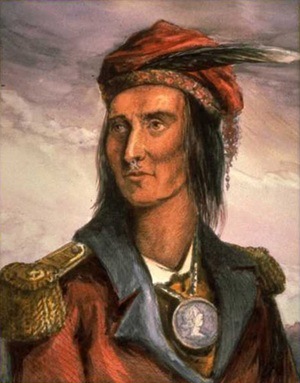 9 Responses to Red Coated Chiefs of the Shawnee