Posted on September 7, 2012 by Roberta Estes 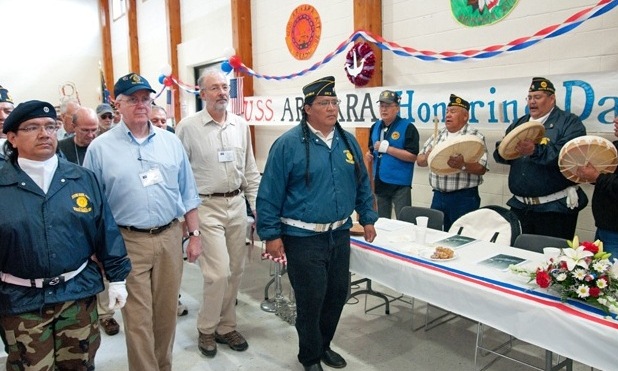 A connection between crewmembers on a small United States Navy ship and a Native American tribe in North Dakota is now forever tied. On June 20, 2012, eight Vietnam War Navy veterans who served aboard the USS Arikara were in White Shield, N.D., on the Fort Berthold Indian Reservation for a reunion, as well as to meet members of the tribe for which the ship was named.

For those who don’t know, the Native American tribes have always honored warriors and veterans highly.  Native Americans have a higher percentage of their population who have served in the military than any other ethnic group.  The tradition of honoring veterans continues today with every powwow that I’ve ever attended, regardless of the sponsoring tribe.  All Native people are extremely proud of those who serve.

Veterans are always a part of the Grand Entrance ceremony and there is almost always a “Head Veteran.”  George Martin, below, at the Mother Earth Powwow in March, 2012, has been leading Michigan powwows for at least 30 years now as our beloved Head Veteran.  At some point in the festivities, all veterans present are generally recognized as well.

In 1998, a Powwow was formed specifically to honor veterans – http://www.defense.gov/specials/nativeamerican01/powwow.html

Today there is an annual Veterans Powwow – http://nhinac.weebly.com/annual-veterans-powwow–psu.html

Hat tip to Sharron for the info about the Arikara crew.