In the 1869 Cherokee West Census, I came across a couple of entries that were quite interesting, and of course, I had to take a small detour to see what I could find.

Corntassel is a well know Cherokee, but how did Susan Corntassel, a white, obtain a clearly Native name, Corntassel.  I decided to take a look and see what I could find.

I found what I believe is the answer in the book, “Tahlequah: And the Cherokee Nation” by Deborah L. Duvall.  This excellent book documents many of the Cherokee families using information from the families.  This book often includes photos which were taken in the late 1800s.

Here’s what Duvall’s book had to say:

“It is said by family members that their ancestor, Corntassel, and his first wife were detained for a time in a stockade during the Trail of Tears.  The wife became sick and died along the Trail.  Corntassel had been close friends with a man known as “the Robin” who was killed, leaving his daughter, Susan Robbins, an orphan in the old Cherokee Nation.  For the sake of his old friend, Corntassel arranged for Susan’s passage to Indian Territory on a later trip across the Trail and married her.

There is some debate as to whether or not Susan was a Cherokee.  Depending on who you talk to, she is described in varying degrees from a white woman to a full-blood.  Whatever her lineage, she and Corntassel started a family that now has many proud Cherokee descendants.”

The entry for Susan on the census in 1869 as “white” seems to address the mystery surrounding her ancestry.  I was surprised to see her photo.  It’s shown below, taken sometime in the late 1800s, courtesy of the family and found in Duvall’s book. 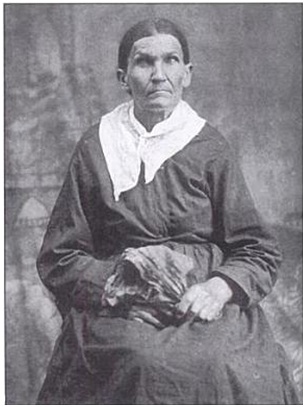 Corntassel himself was very interesting as well.  Duvall says that, “According to some family members, Corntassel left the old Cherokee country with the Old Settlers in the 1820s, but he served as wagon master during the Trail of Tears.  He helped the Cherokees to make the treacherous journey at least four times, and some say it was seven.  Corntassel was a blacksmith and he carried pieces of his “luber,” a machine used in his trade, from the homeland to Indian Territory with each trip until he had moved the entire thing.

Corntassel settled on Cherokee Nation land just west of Westville where the community came to be known as Green.  It became “Old Green” when another community, also called Green, was established in Delaware County.  From Highway 51 west of Westville, you can take Ross Swimmer Road toward Old Green.  On the way, you will come upon a small cemetery with a sign that reads “Corntassel 1891.”    There you will find the grave of Corntassel and his family members.  He was believed to be 117 years old at the time of his death.”  His photo, below is from the same source.