What is a Johnnycake?

In the 1869 Cherokee West census, there are several families with the surname Johnnycake.  This makes me wonder, what, exactly, is a Johnnycake and what is the history of the food?

Some think these fried cornmeal cakes were originally called Journey Cakes, while others belive they were first called Shawnee Cakes after the tribe in the Tennessee Valley.  They look much like a cornmeal pancake.   You can find a recipe here:  http://southernfood.about.com/od/cornbread/r/bl01002g.htm 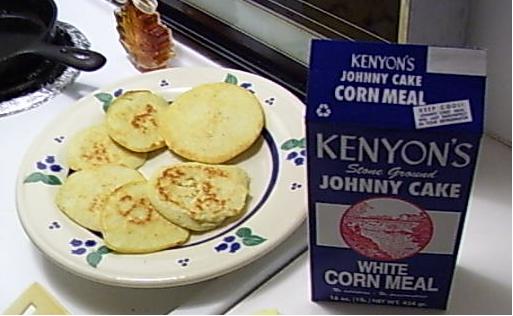 Also spelled Jonnycakes, the earliest attestation of the term “johnny cake” is from 1739 (in South Carolina); the spelling “journey cake” is only attested from 1775 (on the Gulf coast), but may be the earlier form. The word is likely based on the word “Jonakin,” recorded in New England in 1765, itself derived from the word “jannock,” recorded in Northern England in the 16th century.  According to wiki, it is the term was the name given “by the [American] negroes to a cake made of Indian corn (maize).”

The cornmeal flatbread is indigenous to the Native people and is prepared and eaten from Newfoundland to Jamaica.  It’s now a New England staple and is known also as “hoecake” in the south.

Native Americans were using ground corn for cooking long before European explorers arrived in the New World. The jonnycake originates with the native inhabitants of Northern America; the Algonquians of the Atlantic seaboard are credited with teaching Europeans how to make the food.

Southern Native American culture (Cherokee, Chickasaw, Choctaw, Creek) is the “cornerstone” of Southern cuisine. From their culture came one of the main staples of the Southern diet: corn (maize), either ground into meal or limed with an alkaline salt to make hominy, also called masa, in a Native American technology known as nixtamalization. Corn was used to make all kinds of dishes from the familiar cornbread and grits to liquors such as whiskey and moonshine, which were important trade items. Cornbread was popular during the American Civil War because it was very cheap and could be made in many different sizes and forms. It could be fashioned into high-rising, fluffy loaves or simply fried for a fast meal.

3 Responses to What is a Johnnycake?