John and Eliza Tecumseh were the only two households in the Cherokee West 1869 census to use the surname of Tecumseh.  They are also listed as Mexican Indians.  Initially, I thought that Mexican Indians meant Indians who had joined the Cherokee from Mexico, but I later learned that a group of Cherokee had settled across the border in Mexico after surviving the Trail of Tears in the 1830s.  These people could well be those Indians and their descendants.

Regardless, I was surprised to see the name Tecumseh, as I knew he was a revered Shawnee leader.  I didn’t expect to see his name among the Cherokee.  Let’s take a look at Tecumseh’s life and see if we can glean any hints as to why. 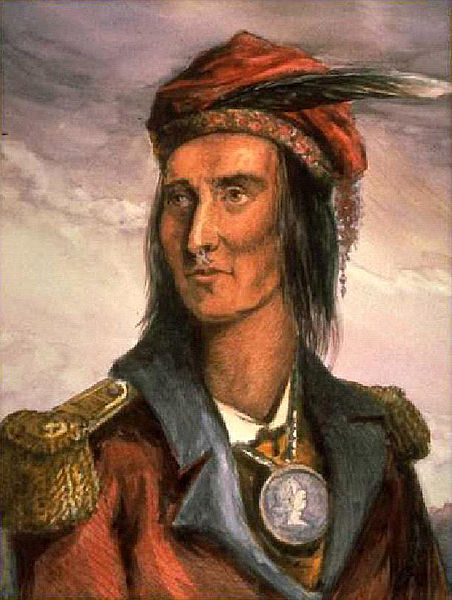 Tecumseh (March 1768 – October 5, 1813) was a Native American leader of the Shawnee and a large tribal confederacy (known as Tecumseh’s Confederacy) which opposed the United States during Tecumseh’s War and the War of 1812. Tecumseh has become an icon and heroic figure in American Indian and Canadian history.

Tecumseh grew up in the Ohio Country during the American Revolutionary War and the Northwest Indian War where he was constantly exposed to warfare.  With Americans continuing to encroach on Indian territory after the British ceded the Ohio Valley to the new United States in 1783, the Shawnee moved farther northwest. In 1808, they settled Prophetstown in present-day Indiana.

Tecumseh’s father was Puckshinwa (in Shawnee, Puckeshinwau, meaning “Alights from Flying”, “Something that drops” or “I light from flying”), a minor Shawnee war chief of the Kispoko (“Dancing Tail” or “Panther”) band and the Panther Clan of the tribe. Puckshinwa’s father was Muscogee (Creek) and his mother was Shawnee. Either because his father died when he was young or because among the Creeks a husband lives with his wife’s family, Puckshinwa was considered a Shawnee.

Tecumseh’s mother was Methotaske (in Shawnee, Methoataaskee, meaning “[One who] Lays Eggs in the Sand” or “A turtle laying eggs in the sand”), Puckshinwa’s second wife. She is believed to have been Shawnee through her father and her mother, possibly of the Pekowi band and the Turtle Clan.  Some traditions hold that she was Creek, because she had lived among that tribe prior to marriage; some hold that she was Cherokee, having died in old age living among that tribe; still others hold that she was a white captive, as family stories claim that Puckshinwa had been married to a white captive. Shawnee lineage was recorded paternally, which made Tecumseh a member of the Kispoko.

The fact that Tecumseh’s mother lived among, and died among, the Cherokee may well be the clue we need as to why we find Tecumseh’s name among Cherokee families, regardless of his mother’s original heritage.

At the time Tecumseh’s parents married, their tribe was living somewhere near modern Tuscaloosa, Alabama. The tribe had lived in that region alongside the Creek tribe since being driven from their homes in the Ohio River Valley by the Iroquois (based in New York and Pennsylvania) during the 17th-century Beaver Wars.

About 1759, the Pekowi band decided to move west into the Ohio Country. Not wanting to force his wife to choose between him and her family, Puckshinwa decided to travel north with her. The Pekowi founded the settlement of Chillicothe where Tecumseh was likely born. During the 1760s, Puckshinwa took part in the French and Indian War.

Tecumseh (in Shawnee, Tekoomsē, meaning “Shooting Star” or “Panther Across The Sky,” also known as Tecumtha or Tekamthi) was born about March 1768. His birthplace, according to popular tradition, was Old Chillicothe, the present-day Oldtown area of Xenia Township, Greene County, Ohio, about 12 miles east of Dayton.

“As Pucksinwah stared at the sky on this night, he saw a huge meteor streak across from the north, leaving a trail of greenish-white flame. It lasted for fully 20 seconds and was unlike anything he had ever seen before. This was the Panther spirit that the old men sometimes spoke of, and a good sign indeed. As the women around the fire talked excitedly and pointed to the heavens, a baby’s cry came from the shelter. Usually a child was not named for several days while the parents waited for a sign to indicate what the great spirit Moneto wished the child to be called, but this child must surely be named Tecumseh, “The Panther Passing Across”. ”

Not long after Tecumseh’s birth, the family moved to the village of Scioto.

When Tecumseh was a boy, his father Puckshinwa was “brutally murdered” by white frontiersmen who had crossed onto Indian land in violation of a recent treaty, at the Battle of Point Pleasant during Lord Dunmore’s War in 1774. Tecumseh resolved to become a warrior like his father and to be “a fire spreading over the hill and valley, consuming the race of dark souls.”

At age 15, after the American Revolutionary War, Tecumseh joined a band of Shawnee who were determined to stop the white invasion of their lands by attacking settlers’ flatboats traveling down the Ohio River from Pennsylvania. In time, Tecumseh became the leader of his own band of warriors. For a while, these Indian raids were so effective that river traffic virtually ceased.

In early 1789, Tecumseh traveled south with Cheeseekau to live among, and fight alongside, the Chickamauga faction of the Cherokee. Accompanied by twelve Shawnee warriors, they stayed at Running Water, in Marion County, Tennessee.

Tecumseh returned to Ohio in late 1790, having fathered a Cherokee daughter before leaving, according to Cherokee oral tradition.

Aha, a second clue as to why Tecumseh’s name might be found among the Cherokee.

Tecumseh spent the rest of his life attempting to congeal a Native Confederacy to oppose the whites and their relentless advances upon the Indian lands.  Tecumseh was a great orator and gave several speeches.  These excerpt sums his thoughts up pretty succinctly.

“As Tecumseh Brothers, When the white men first set foot on our grounds, they were hungry; they had no place on which to spread their blankets, or to kindle their fires. They were feeble; they could do nothing for themselves. Our father commiserated their distress, and shared freely with them whatever the Great Spirit had given his red children. They gave them food when hungry, medicine when sick, spread skins for them to sleep on, and gave them grounds, that they might hunt and raise corn. Brothers, the white people are like poisonous serpents: when chilled, they are feeble and harmless; but invigorate them with warmth, and they sting their benefactors to death.

Where today are the Pequot? Where are the Narragansett, the Mochican, the Pocanet, and other powerful tribes of our people? They have vanished before the avarice and oppression of the white man, as snow before the summer sun … Sleep not longer, O Choctaws and Chickasaws … Will not the bones of our dead be plowed up, and their graves turned into plowed fields?”

A comet appeared in March 1811. Tecumseh, whose name meant “shooting star”, told the Creeks that the comet signaled his coming. Tecumseh’s confederacy and allies took it as an omen of good luck. McKenney reported that Tecumseh claimed he would prove that the Great Spirit had sent him to the Creeks by giving the tribes a “sign.”

On December 16, 1811, the New Madrid Earthquake shook the South and the Midwest. While the interpretation of this event varied from tribe to tribe, one consensus was universally accepted: the powerful earthquake had to have meant something. For many tribes it meant that Tecumseh and the Prophet must be supported.

Tecumseh’s warriors fought with the British in the War of 1812.  On October 5, 1813, the Americans attacked and won a victory over the British and Native Americans at the Battle of the Thames, near Moraviantown near present-day Chatham, Ontario. During the battle, Tecumseh was killed, and shortly afterward, the tribes of his confederacy officially surrendered to Harrison at Detroit.  In 1837, in part because of reports that it was he who had killed Tecumseh, Richard Mentor Johnson was elected vice-president of the United States, to serve with Martin Van Buren.

Looking a bit further, quite a bit of scholarly research has been done as to the ancestry of Tecumseh.  No consensus has been reached, although the research is fascinating, but it’s clear that both the Creek and Cherokee were anxious to claim Tecumseh as their own, in addition, of course, to the Shawnee.  There are notations about people in both the Creek and Cherokee tribes being named for him.

You can read more about Tecumseh and his mother’s heritage at these links:

3 Responses to Tecumseh – Shooting Star – Panther Across the Sky