One of the great things about blogging is that you get the opportunity to learn.  One of our subscribers, Steve, send me a note and said that he considered King Philip’s War to be the final war, not the first war, and the 1637 Pequot War was really the first.

So I took a look, and lo and behold, Steve is right.  Who knew? Thanks Steve!

The Pequot War was an armed conflict spanning the years 1634–1638 between the Pequot tribe against an alliance of the Massachusetts Bay, Plymouth, and Saybrook colonies who were aided by their Native American allies, the Narragansett and Mohegan tribes. Hundreds of Native people were killed; hundreds more were captured and sold into slavery to the West Indies. Other survivors were dispersed. At the end of the war, about seven hundred Pequots had been killed or taken into captivity.  The result was the elimination of the Pequot as a viable political entity in what is present-day Southern New England.

The Pequot and their traditional enemies, the Mohegan, were at one time a single sociopolitical entity. Anthropologists and historians contend that sometime before contact with the Puritan English, the Pequot split into the two competing groups. The earliest historians of the Pequot War speculated that the Pequot migrated from the upper Hudson River Valley toward central and eastern Connecticut sometime around 1500. These claims are disputed by the evidence of modern archeology and anthropology finds.

In the 1630s, the Connecticut River Valley was in turmoil. The Pequot aggressively worked to extend their area of control, at the expense of the Wampanoag to the north, the Narragansett to the east, the Connecticut River Valley Algonquians and Mohegan to the west, and the Algonquian people of present-day Long Island to the south. The tribes contended for political dominance and control of the European fur trade. A series of smallpox epidemics over the course of the previous three decades had severely reduced the Indian populations due to their lack of immunity to the disease. As a result, there was a power vacuum in the area.

The Dutch and the English were also striving to extend the reach of their trade into the interior to achieve dominance in the lush, fertile region. By 1636, the Dutch had fortified their trading post, and the English had built a trading fort at Saybrook. English Puritans from Massachusetts Bay and Plymouth colonies settled at the newly established river towns of Windsor, Hartford and Wethersfield.

Before the war’s inception, efforts to control fur trade access resulted in a series of escalating incidents and attacks that increased tensions on both sides. Political divisions between the Pequot and Mohegan widened as they aligned with different trade sources—the Mohegan with the English, and the Pequot with the Dutch. The Pequot assaulted a tribe of Indians who had tried to trade at Hartford. Tension sparked at the Massachusetts Bay Colony, a stronghold for wampum, the supply of which the Pequot had controlled up until 1633.

John Stone, an English rogue, smuggler and privateer, and about seven of his crew were murdered by the Western tributary clients of the Pequot, the Niantic. According to the Pequots’ later explanations, they did that in reprisal for the Dutch having murdered the principal Pequot sachem Tatobem, and were unaware of the fact that Stone was English and not Dutch. In the earlier incident, Tatobem had boarded a Dutch vessel to trade. Instead of conducting trade, the Dutch seized the sachem and appealed for a substantial amount of ransom for his safe return. The Pequot quickly sent bushels of wampum, but received only Tatobem’s dead body in return.

Stone, the privateer, was from the West Indies. He had been banished from Boston for malfeasance (including drunkenness, adultery and piracy). Since he was known to have powerful connections in other colonies as well as London, he was expected to use them against the Boston colony. Setting sail from Boston, Stone abducted two Western Niantic men, forcing them to show him the way up the Connecticut River. Soon after, he and his crew were suddenly attacked and killed by a larger group of Western Niantic. While the initial reactions in Boston varied between indifference and outright joy at Stone’s death, the colonial officials later decided to protest the killing. They did not accept the Pequots’ excuses that they had been unaware of Stone’s nationality. The Pequot sachem Sassacus sent some wampum to atone for the murders, but refused the colonists’ demands that the Western Niantic warriors responsible for Stone’s death be turned over to them for trial and punishment.

On July 20, 1636, a respected trader named John Oldham was attacked on a trading voyage to Block Island. He and several of his crew were killed and his ship looted by Narragansett-allied Indians who sought to discourage English settlers from trading with their Pequot rivals. In the weeks that followed, colonial officials from Massachusetts Bay, Rhode Island, and Connecticut, assumed the Narragansett were the likely culprits. Knowing that the Indians of Block Island were allies of the Eastern Niantic, who were allied with the Narragansett, Puritan officials became suspicious of the Narragansett. However, Narragansett leaders were able to convince the English that the perpetrators were being sheltered by the Pequots.

Raids and warfare followed, on both sides, but the final blow was dealt by the English when they massacred the Pequot at their village, Mystic.  Today, this is known as the Mystic Massacre.  Most of the men were absent from the fort, so mostly women, children and the elderly were present.  The English set the fort on fire, and directed that anyone attempting to escape should be killed.  Between 600 and 700 Pequot perished in the fort, with only 7 taken prisoner and another 7 escaping into the woods.  The woodcut below represents the attack on Fort Mystic. 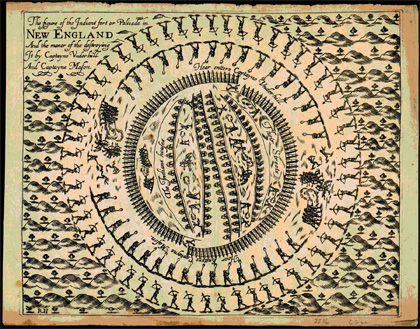 In September, the victorious Mohegan and Narragansett met at the General Court of Connecticut and agreed on the disposition of the Pequot and their lands. The agreement, known as the first Treaty of Hartford, was signed on September 21, 1638. About 200 Pequot “old men, women, and children” survived the war and the massacre at Mystic. Unable to find refuge with a neighboring tribe, they finally gave up and offered themselves as slaves in exchange for life:

“ There were then given to ONKOS, Sachem of MONHEAG, Eighty; to MYAN TONIMO, Sachem of NARRAGANSETT, Eighty; and to NYNIGRETT, Twenty, when he should satisfy for a Mare of Edward Pomroye’s killed by his Men. The Pequots were then bound by COVENANT, That none should inhabit their native Country, nor should any of them be called PEQUOTS any more, but MOHEAGS and NARRAGANSETTS for ever.”

This is one of the saddest documents I’ve seen in a long time.

Other Pequot were enslaved and shipped to Bermuda or the West Indies, or were forced to become household servants in English households in Connecticut and Massachusetts Bay. Colonists appropriated Pequot lands under claims of a “just war”. They essentially declared the Pequot extinct by prohibiting speaking the name of the people. The few Pequot who managed to evade death or slavery later recovered from captivity by the Mohegan and were assigned reservations in Connecticut Colony.

The colonists attributed the success of end of the murderous aggression of the Pequot tribe to an act of God:

“ Let the whole Earth be filled with his Glory! Thus the LORD was pleased to smite our Enemies in the hinder Parts, and to give us their Land for an Inheritance. ”

“ And now I am old, I would fain die a natural death or like a soldier in the field with honor and not to have a sharp stake set in the ground and thrust into my fundament and to have my skin flayed off by piecemeal and cut in pieces and bits and my flesh roasted and thrust down my throat as these people have done and I know will be done to the chieftest in the Country by hundreds if god should deliver us into their hands as Justly he may for our sins. ”

This was the first instance wherein Algonquian peoples of what is now southern New England encountered European-style warfare. After the Pequot War, much weakened, the Native people were too frightened to rise up against the colonists. In 1675, a fairly long period of peace came to an end with the outbreak of King Philip’s War.

You can read more about the Pequot War at this link.